The national flag of Bhutan was first designed by Mayum Choying Wangmo Dorji in 1947. After years, in 1956, the final shape of the officially Bhutan national flag was introduced. The Bhutanese flag is divided diagonally with the upper part of the flag is golden yellow symbolizing the almighty power of the King and the secular authority of this country then the lower part is orange color representing spiritual power of Buddhism in the country that is controlled chiefly by Drukpas monasteries. In the middle, a white dragon separating the two diagonals expresses the name of Bhutan Kingdom: Druk Yul which means Thunder Dragon. Bhutanese people believe that the thunder is the voice of the dragon roaring that emphasizing the power of Bhutan Kingdom. 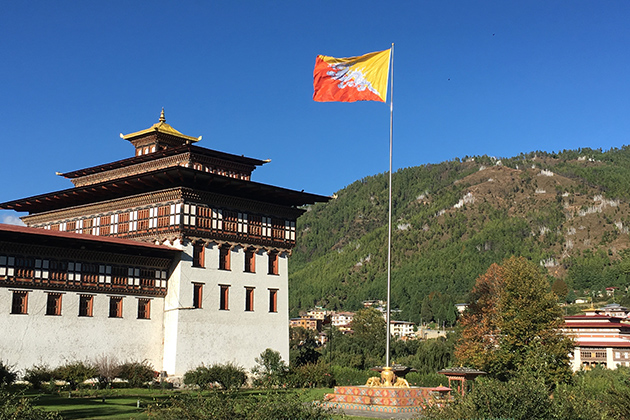 The white dragon itself is associated with the purity, stands for Bhutan and the four objects held in its claws, jewels, representing the wealth and security of the nation. The symbol of the snarling white dragon expresses male and female deities who always protect the country away from harm and inimical to outside forces threatening them. Bhutan is run by constitutional monarchy including the King and Parliament. A monastery named ‘Druk’ which means Thunder Dragon along with its sect ‘Drukpas’ was set up in Bhutan in the late 12th century. Since then, the dragon has played an essential role in Bhutanese people’s daily life.

On your way of enjoying Bhutan vacation, you surely see the Bhutanese flag, at least once. So, if you want to know more about the National flag of Bhutan, let check out the information below.

The flag with the square shape, divided diagonally, with a yellow upper part and red lower part and a green dragon placed in the middle first appeared during the signing of the Indo-Bhutan Treaty of 1949. The green dragon in the center of the flag, based on the turquoise dragon ‘Yu Druk Ngonm’was embroidered on the original flag by a court painter, Lharip Taw Taw. 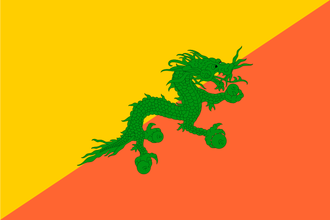 In late 1956, the Bhutan government welcomed the Indian officials to Bhutan then they noticed that the Indian flag was just as 2:3 size proportion as the Bhutanese flag, hence, it flew better. After that, a revolution was immediately launched to redesign the size of the Bhutan flag, based on the size of the Indian flag which is 9 feet by 6 feet. The green color of the dragon was changed to white color and was set straight. In the late sixties, the red color of the flag upper part was changed to orange to express Buddhism.