Bhutan – the land of the Thunder Dragon was founded in 1616 by Shabdrung Ngawang Namgyel who successfully unified Bhutan into one religious state. When he passed away, the Kingdom was under the Shabdrung’s ‘Dual System of Government’ that government control was specifically split into 2 parts including the religious leader (Je Khenpo) and the civil administrative leader (Druk Desi). Both of them were under the authority of the Shabdrung Rinpoche ( the Shabdrung Ngawang Namgyel’s reincarnation).

The Dual System of Bhutan was over when the Ugyen Wangchuck who was chosen by the Penlop (means governor) of Trongsa and amongst all rulers, ruled the world. The fact that Bhutan Kings who were humble and far-sighted, have ruled the country just like the love of parents for their children. Below, there are the 5 Kings of Bhutan including 4 former Kings and a current one.

King Ugyen Wangchuck was given birth in 1862. He succeeded his father (Jigme Namgyel) as the Penlop of Trongsa. He established his power base in Central Bhutan and by subjugating political enemies during a period of civil wars and 1880’s rebellion, he unified Bhutan. 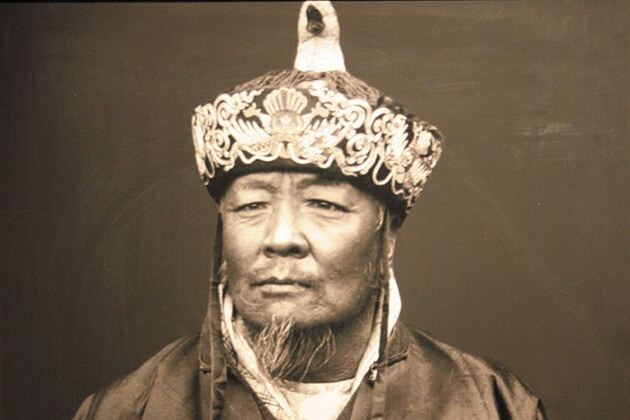 During the period of leading up to his monarchy, he had a huge contribution in developing close relations with the British by being an assistant for negotiations between Britain and Tibet. He was knighted and gave the title of Knight Commander of the Indian Empire in 1904. Following the bestowed title, he once again received honors from both the British and India because of his ability to built diplomatic relations without sacrificing his country’s sovereign.

On 17th March 1907, Sir Ugyen Wangchuck was elected to be Bhutan King with the title of ‘Druk Gyalpa’. Since then, I continued keeping close relations with the British and India to make sure that Bhutan would be safe from the increasing Chinese influence in Tibet. During King Sir Ugyen Wangchuck’s reign, Bhutan remained isolated to the outside world.
In 1926, the first King of Bhutan passed away. His eldest son – Jigme Dorji Wangchuck was succeeded.

King Jigme Wangchuck – the second ruler of the Kingdom crowned in 1926 when he was 21. To prepare for his event, since he was born, King Jigme Wangchuck was raised under a strict education in English and Hindi as well as schooled in Buddhist principles.

During the time he ruled the country, he implemented administrative reforms within the country as a simple hierarchical system was placed where he could use his power over matters from religion, secularist to the appointment of a head abbot (Je Khenpo) to establish a central religious administrative body. In this period, Bhutan still remained its journey of being isolated to the rest of the world. In 1952, King Jigme Wangchuck passed away and his son – Jigme Dorji Wangchuck was crowned. 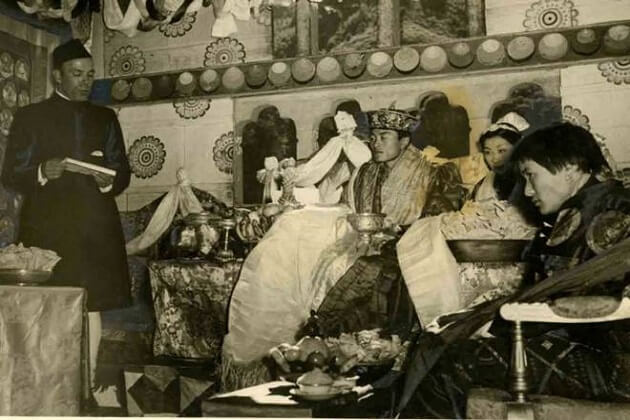 King Jigme Dorji Wangchuck (1929 – 1972) was crowned at the age of 23 and he also was the King known as the father of modern Bhutan as he had a huge contribution in establishing international relations for the world to recognize Bhutan as an independent country and to protect its sovereignty. 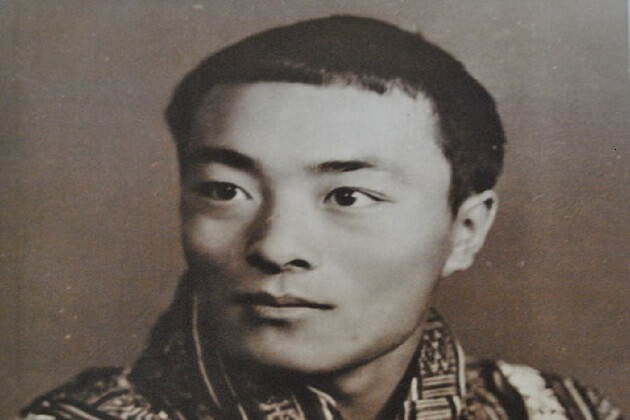 In 1862, King Jigme Dorji Wangchuck enjoyed the Colombo Plan that his country would receive technical assistance for infrastructure development and educational scholarships. In 1971, Bhutan officially became a member of the United Nations. In 1961, Jigme Dorji Wangchuck drafted the first economic development plan of the country which has been followed today. It was all about his vision and lessons he learned from his ancestors that let him know that centralized power was not the way making Bhutan continue enjoying stability and peace. Thus, the King set up a modern judicial system and the first Council of Ministers of Bhutan.

Also, he established the Nation Assembly (tshogdu) who could remove the King or his successors with a two-thirds authority. These things allowed Bhutan to take the first step towards democracy. King Jigme Dorji Wangchuck passed away at the age of 43 while receiving especially medical treatment in Nairobi. His son – Jigme Singye Wangchuck succeeded afterward.

King Jigme Singye Wangchuck (1972) succeed the throne when he was just 17 making him the youngest monarch in the world at that time. Like his father, he received a modern education as he studied abroad in both India and the UK. During his childhood, he grew up close to his father; thus, he was influenced by him so much. During his reign, he continued with the phase of modernization and socio-economy that had been set in motion by his father.

There were 2 milestones when he ruled the country which leaped Bhutan forward in progress. King Jigme Singye Wangchuck slowly started decentralizing his power and the role of Prime Minister (PM) was created in 1998. In 2006, he announced that it was the time for a democratic government. After researching constitutions of more than 50 countries along with seeking comments from the public and consulting with the 20 Dzongkhas, the Constitution was enacted in 2008. Following the event, elections took place in the same year that gave birth to a new system of governance. 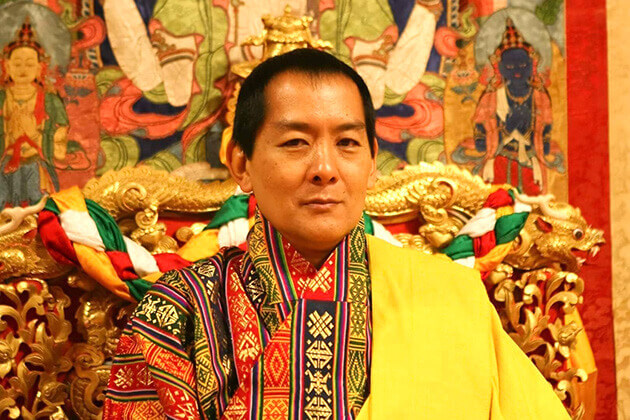 King Jigme Singye Wang Chuck was also the father of the philosophy Gross National Happiness (GNH) which emphasized the idea that the development of the country had to go with the happiness of the people.

Bhutan’s economy, during his reign, accelerated as he established industries in raw materials, agriculture, and hydropower. Roads were extended connecting the country even in remote regions. Schools were built as well. Recognizing the importance of education, the King encouraged students and sent them to pursue abroad. Also, the first Airline was operated at that time. His love for Bhutan was evidenced when he led the army and successfully defeated insurgents from India in 2003.

This was the first time Bhutan witnessed a history of a new King succeed a throne when his father did not pass away as the Jigme Singye Wangchuck abdicated his throne to his son – King Jigme Khesar Namgyel Wangchuck.

Jigme Khesar Namgyel Wangchuck was born in 1980 and he is the fifth monarch of Bhutan. On November 1st, 2008, he coronated. This event marked the 100 years of the monarchy in Bhutan.

Just like his father and grandfather, he received a foreign education. He studied in the US before graduating from Magdalen College – University of Oxford. The doubt and concerns of the nation about his father’s abdication before 2 years were quickly alleyed in the young king’s first speech assuring that he kept ruling the country with his father’s policies. 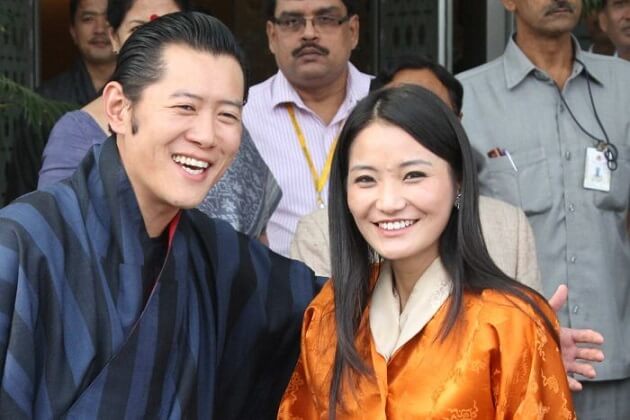 In March 2009, King Jigme Khesar Namgyel Wangchuck launched the first landmark project – the National Cadastral Resurvey focusing on enhancing the living standard of people in remote areas. In 2011, the Kidu Foundation was launched.

Also, in 2011, the King married Jetsu Pema. This royal wedding was the largest media event in Bhutan’s history. Just like his father, the young King is well-known at home and even overseas. With his Queen, they travel abroad and have raised Bhutan’s profile as a sovereign country. He also gained the respect of his people. In 2015, the King and Queen visited Singapore to show their last respect to the PM of Singapore – Mr. Lee Kuan Yew.

So, that’s all about the 5 Bhutan Kings. Each of them all has a big contribution making Bhutan become a better country and most importantly, the happinest country in the world. In your Bhutan vacation, you will see lots of images of Bhutan King and Queen and, I know you know the reason why.