The Bumthang valley is the spiritual heartland of the nation and home to some of the ancient Buddhist temples and monasteries. The valley is famous for the production of honey, cheese, apples, and yatra (woolen materials); hence, it is easy to understand why Bumthang is also referred to as a Switzerland of the East. Tourists tend to spend their Bhutan tours mostly on Thimphu and Paro; however, if you really want to immerse yourself in the spiritual ambiance of Buddhism, Bumthang will be your thing. If you are wondering what places should you visit in there, the category of 10 places to-go in Bumthang can be your guide.

The 5 Best Destinations to Visit in Bumthang

One of the most famous Bumthang Attractions, Jakar Dzong – the official name is Yuelay Namgyal Dzong, in Bhutan means castle of a white bird, was initially built as a monastery in 1549 by Zhabdrungs grandfather Ngagi Wangchuck. Located in the heart of Bumthang, Jakar has its own stunning view overlooking the Choekar town and a wide open view of the Bumthang valley. The dzong, today, like any other administrative Dzong, it is the headquarter center for Bumthang valley, and also is home to the regional monk body. 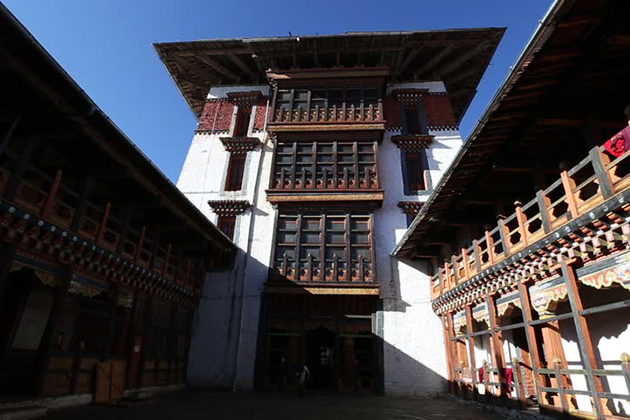 Just 48km away from Jakar, about one and a half hour drive, on the way to reach to Ura valley, you can notice the highest and greatest mountain range in Bhutan, Mt. Gangkhar Puensum (23,750 feet). The valley is home to the Ura village which has clustered houses separated by cobblestone alleys, a sight unusual in the country. Located above Ura village, about 3.100m is a new temple worshiping saint Guru Rinpoche. Established in 1986, it contains a giant statue of the master and remarkable paintings of the cycle of his teachings. 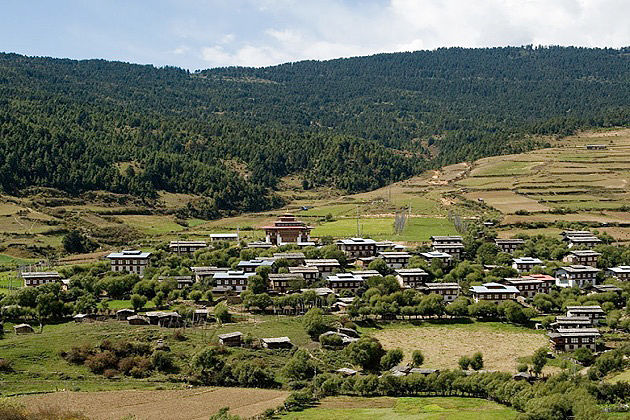 This is a newly opened trekking trail and comprises of low altitudes but quite steep climbs and descents. For one who does not has lots of experience in trekking, it is an absolutely challenging trial; however, it is still a beautiful trail passes through Bumthang and reaches Trashiyagtse that people really want to enjoy.
From ancient times, the route played an essential role in Bhutanese community as a trade road but with time, it has been losing its usage and now turns to a hiking trail. Surrounded by the mountain range, pastures, meadows, dense bamboo forest and alpine trees, this route is really one of the best places in Bumthang that you have to visit.

One of the special temples in Bumthang along with Kyichu Lakhang of Paro, this beautiful temple was built in the 8th century on the solid rock which can be seen from inside the shrine and related to saint Guru Rinpoche. The Kuje complex contains three temples which are dedicated to the three kings of Bhutan. The first temple is the oldest one where contains the rock with Guru Rinpoche’s body imprint. The second temple was constructed by Ugyen Wangchuck and is home to a giant picture of Guru Rinpoche. The last one was built in Bhutanese traditional style and blended wonderfully with the older buildings.

It is one of the 108 monasteries built just on a single night by the Tibetan King Songtsen Goenpo in the 7th century to subdue evil spirits in the Himalayan region. The monasteries were built over her body parts that spread over Tibet, Bhutan and the borderlands. Along with Jambay Lhakhang, you can find some of other several well-known monasteries such as Jorkhang in Lhasa, and Kichu in Paro. Legend has it that the Jambay Lhakhang was later visited by saint Guru Rinpoche and was restored by Sindhu Raja after being cured by Guru Rinpoche. Through repaired and rebuilt several times, the monastery now has its own perfect outlook and becomes one of the best places in Bumthang. 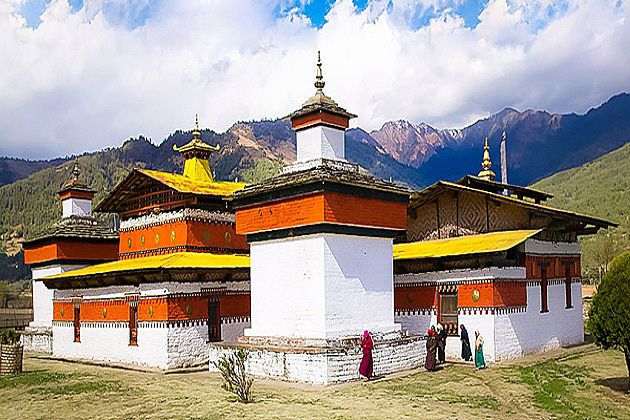 This is a small one-story monastery lying on the other side of the river opposite to the Kurje Lhakhang, surrounded by monastic and village dwellings. It was built in 1501 by Terton Pema Lingpa, a re-incarnated disciple of Guru Padmasambhava. Later, The temple became the headquarter of Terton Pema Lingpa. The monastery, in the past, contained the armory which was an evidence of the saint’s renowned skill as a blacksmith, also cast by Terton Pema Lingpa. Coming inside the temple, you will be attracted by the superb wall paintings of Pema Lingpa and the throne which he built. The temple is also the destination where the Tamshing Phola Choeda Festival annually takes place. 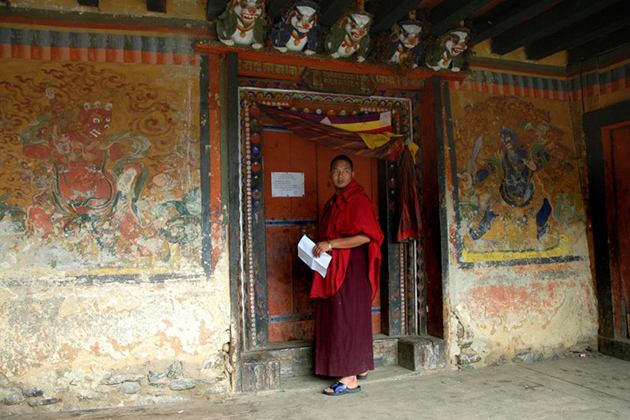 Mebar Tsho or simply known as Burning lake is a sacred lake for the Bhutanese who believe that Terton Pema Lingpa, a Bhutanese saint, discovered religious treasures from this lake in the late 15th century. He dived into the lake with his partner, a burning butter lamp, and returned with a butter lamp still burning and a chest and a scroll, the treasures, in his hand. The river offers beautiful surroundings to suit a nature lover’s taste; however. if you visit the lake, do not go so near to the gorge due to the fast-flowing river. 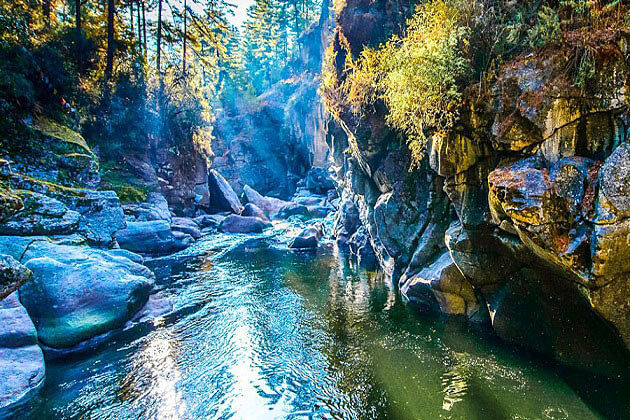 This is the best choice to get into the untouched natural beauty and pictorial scenic in Bhutan. Your Bumthang Owl Trek will start from Manchung, then travel through Dhur village, Drangela Pass and reach Tharpaling monastery. On the trekking trail, you will absolutely indulge yourself in a stunning view of the mountain Gangkar Puensum, the highest unclimbed peak in the world as well as the endlessly evergreen scenery of the dense forests across both sides with blue pine, birch, maple, spruce, juniper, bamboo, and rhododendron trees. The trekking trail is packed with an array of charming floral and fauna along with several oldest Buddhist temples.

Being considered as a spiritual heartland in Bhutan, Bumthang is really a religious hub where converges several precious and oldest Buddhist sites. Coming to the valley, one can explore marvelous, commodious, and lush valleys along with culture treasury and rural life. Also, tourists will throw themselves into the stunning view of Trongsa Dzong lying on the top of the steep ridge dropping off amidst the cloud in the southern end. 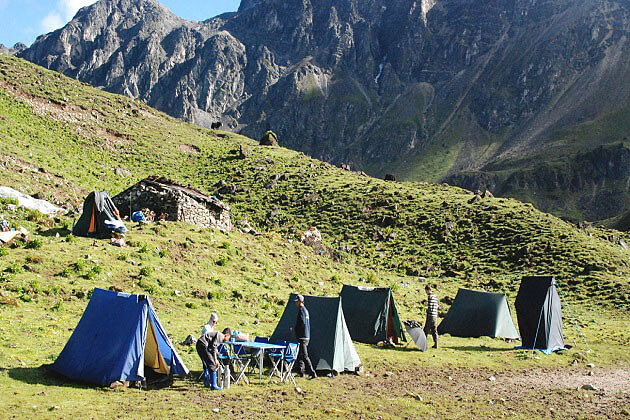 A trekking trail through the ‘cultural hub’ of Bhutan is always a well-worth experience that can be nowhere else found. Enjoying the trek, you are simply getting into the natural beauty of Bhutan with rivers winding around filled with trouts and the lush valleys. The trek also offers a glimpse of some of the oldest Buddhist temples and monasteries.
On this Bhutan trek, you can admire the stunning scenery of several small villages surrounded by the evergreen blue pine and bamboo forests stretching endlessly towards the horizon.