Weather and climate in Bhutan, definitely, is so varied due to the two main factors including the differences in altitude occurring in the kingdom and the influence of the North Indian monsoons. Do you want to get an insight into the weather in Bhutan? Everything you need is all here. Enjoy this article to well prepare for your Bhutan tours.

In the central parts of Bhutan consisting of temperate and deciduous forests, the climate and weather are more seasonal as summer is warm and winter is cool and dry.
The climate in southern Bhutan has a humid and hot subtropical which is fairly unchangeable throughout the year. The temperature in this zone can vary from 15 to 30 degrees Celcius.
Far North Bhutan, the weather is much colder than in other regions during winter. Mountain peaks in this zone are covered in snow (forever) and when it comes to summertime, the weather is still cool due to the high altitude terrain. 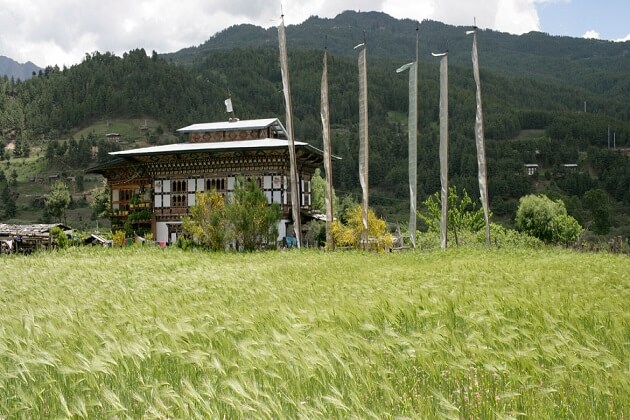 The fact is that there is 4 distinct seasons/ year in Bhutan.
The monsoon season which begins from late June to late September mostly occurs in the southern border region of Bhutan. During this season, rains bring from 60 to approximately 90 percent of the western region’s rainfall. On the northern border, the region annually gets roughly 40 millimeters of rainfall. In the temperate central regions, the precipitation can be commonly up to 1.00 millimeters, especially in the humid, subtropical south, or savanna, the yearly average rainfall can reach 7.800 millimeters.
During the period between early March and mid – April (spring), Bhutan tends to be dry. The Summer in Bhutan occasionally goes with showers from mid-April to late June. The heavy rains happen and last from late June to late September.
When the rainy season ends, Autumn in Bhutan witnesses bright and sunny days. At the higher elevations, snowfalls concur, sometimes.
Winter in Bhutan sets in from late November to March with snowfall occurring throughout much of the country (common in areas above 3.000 meters). Gale-force winds, during this period, tend to happen at the highest altitudes through mountain passes.

Bhutan Weather by Month – Average Temperatures in Bhutan by Months