Deep in the Himalayas, the beautiful magic land of Bhutan is almost unreal that you have to see it and believe it. Furthermore, the lively traditional festival accompanied by an archery tournament couples with the breathtaking landscape that will excite your senses whenever you travel to the country. For so long, archery has been an integral part of the Bhutanese spirituality as well as the festival. It is considered that there is no festival or event that can be completed without an archery match. Archery is Bhutan’s history, love and entertainment, and the national sport of Bhutan. With the unique play and entertainment, the most outstanding celebration of the country will truly give you a dramatic experience in your Bhutan vacation. 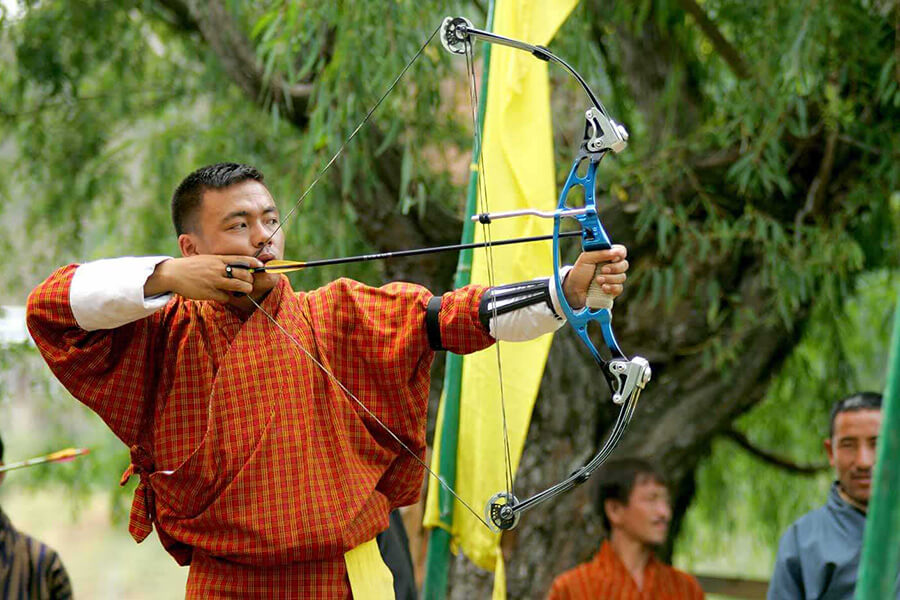 The History of Archery In Bhutan

Inside the bowl of rugged beauty in the tiny mountain kingdom of Bhutan is home to the joyful archery celebration which attracts wide participants all around the country. Though it became the national sport of Bhutan in 1971, the history of Archery had existed for a very long time ago. Under the leadership of the second King of the country Jigme Wangchuk, archery has been practiced by the Bhutanese people in the country since the 1920s against the enemy. Throughout the legendary past of the country, bow and arrow have been the main weapon to force the opponents during the war. Additionally, the story of bow and arrow originated in the 10th century with the myths surrounding the murder of the Tibetan King. He was indicated by some texts to be possessed by a demon making him forbid the display of Buddhism. Furthermore, those people who did not follow the new rule were forced to go hunting. This was totally considered a humiliation to the Buddhist monks who have perceived Buddhist doctrine not to slaughter any creatures. At that time, under the recorded information, there was a Buddhist monk, Lhalung Pelgi Dorji who lived isolated in a cave nearby Lhasa, Tibet made his courageous decision to stop the cruel action of the Demon King. He wore a cloak with a black and white side with a bow and an arrow hidden in his cloak sleeves and rode on the back of a white horse colored by charcoal to enter the palace and performed the Black Hat Dance for the King Langdrama. It is said that he shot the King while he was reading the inscription on a monument.
Nowadays, the bow and arrow are depicted in the Buddhist paintings in the dzong throughout the country and are closely related to religious rituals, ceremonies, and festivals. Likewise, archery has become the favorite sport of Bhutanese people from generation to generation and for tourists, it is one of the best things to do and see in Bhutan. 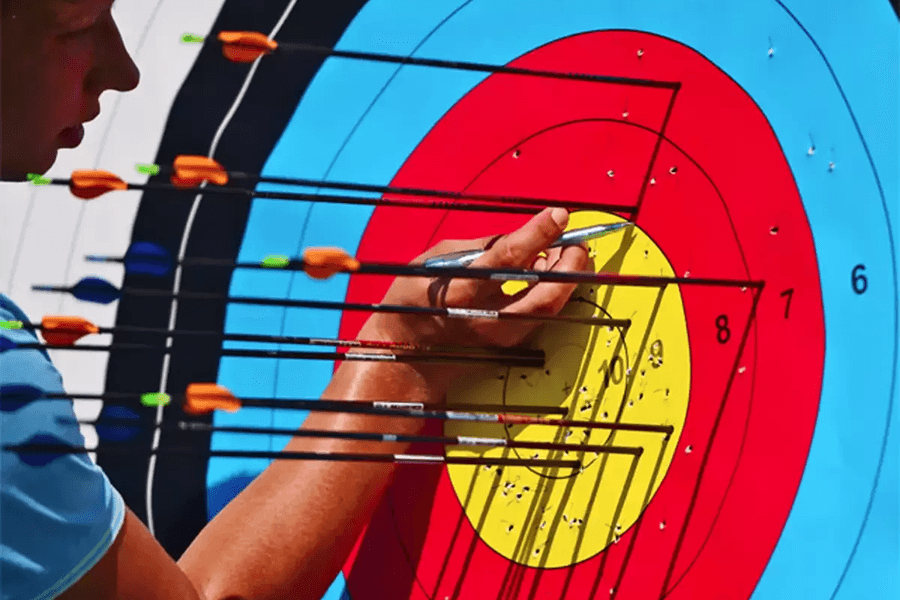 Bhutan Customs During the Archery Tournament

Preparation For The Archery Competition
You may get a bit surprised when hearing about the preparation custom of Bhutanese archers in the night before the tournament. , instead of spending this night with their wives, they spend it in a barn to get more focusing. 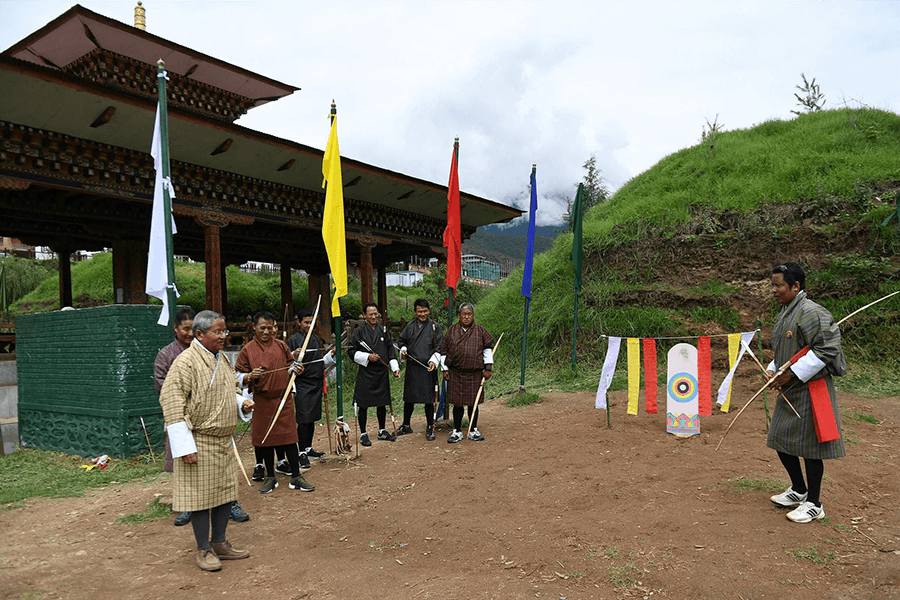 The Exciting Cham Dance in the Archery Contest

The archery match in Bhutan is not as simple as a normal contest but contains the essence of Bhutanese culture reflecting the vibrant traditional customs of the people. The match cannot be completed without performing the cham dance to celebrate after the contestant hit the target. Here offers you the most exotic experience in your life to witness the way people do to distract their opponents. Each team has dancers and singers serving to cheer their team and even confuse the opponents through the dance. Whenever the opponent misses his target, these singers and dancers will make loud sounds to celebrate. Once attending the tournament, it is really fun to watch!

Drinking In the Archery Game? Not a Big Deal!

Unlike other games, archery and alcohol in Bhutan go together and it is a traditional custom for archers to drink during the match as long as it is within control. Some participants tend to feel loosened up and more focused on the target after drinking.

Traditionally, an archery team consists of 13 participants. The member of each team play the sport full of energy and enthusiasm, they take turns shooting two arrows at a time in one direction with the distance to the target is incredible 145 meters. 2 points are granted when the arrow hit any parts of the target. The game is completed when the first scorer gets 25 points. Nevertheless, the scoring system is quite intricated so the tournament can last for a long time. Previously, the traditional match can last for a month. Normally, the team often operates astrologers to select the player. These astrologers use their particular methods with puppets to decide on the potential player. During the contest, whenever the arrow hit the target, the archer and their cheerleading will celebrate with the unique cham dance or amazing song.

Bhutanese Women In The Archery Tournament

Women in Bhutan who were the archers’ wives are always welcome to the match. However, they do not take part in the game but play a vital role on the sidelines. They support their husband by preparing mouth-watering dishes and drinks. During the contest, they perform the dances to cheer their husband and to confuse the opposing team. Furthermore, they use the humorous to mock the opponents that really impressed to witness! 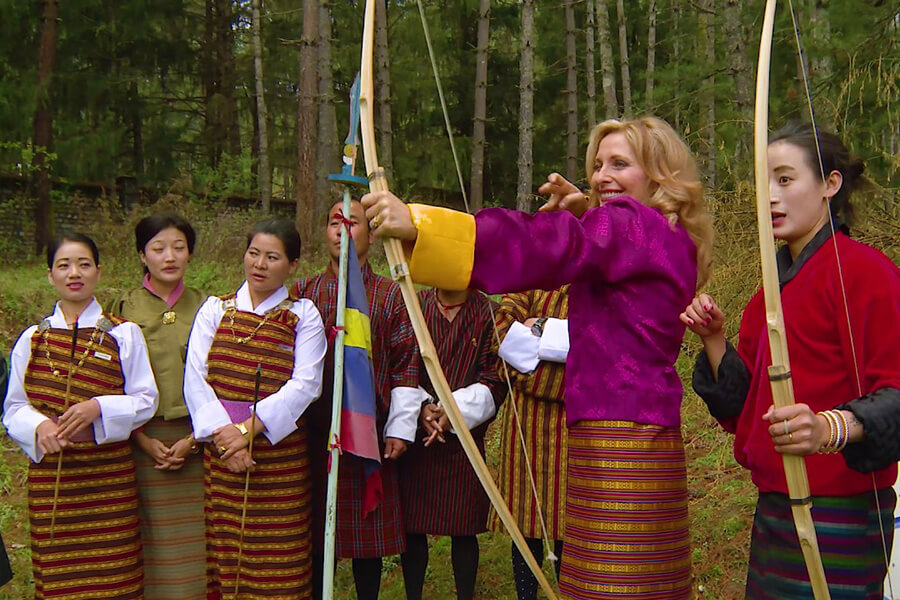 When and Where To Watch The Archery Tournament in Bhutan

Archery games are held throughout the country during religious events, local festivals and national holidays. If you find yourself in Thimphu in the 7, 8, 9 of October, you will have a great chance to witness the lively archery match taking place after one of the grandest festivals of Bhutan Thimphu Tsechu Festival in Changlimithang Stadium, the national stadium of Bhutan with free entrance. 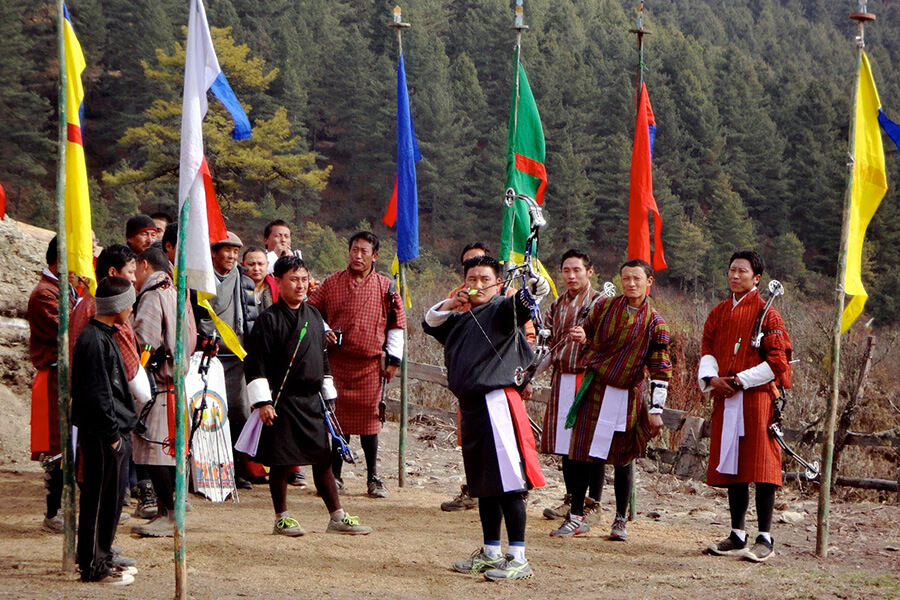