Located on the Eastern slope of the Himalayas between Tibet, China, and India, Bhutan – is a tiny country that is emerging as the treasure of Asia. Settling in this beautiful country, the Sharchop ethnic group of Bhutan, are the earliest migrants to Bhutan whose origin of Indo-Burmese, are mixed among Tibetan, South Asian, and Southeast Asian concentrating in the eastern part of the country. Whenever you intend to explore a Bhutan holiday in the Eastern part, it is valuable when you master the basic information of this largest ethnic group of Bhutan to get an understanding of the people’s characteristics as well as their way of life. Here is the worth information that will provide you a general look at the Sharchops Ethnic group of Bhutan.

According to the demographic statistic in 1981, the Sharchop represented 30% of the population making it the largest ethnic group in Bhutan. Most Sharchops speak Tshangla, also known as the Sino-Tibetan language that is closely connected with the Tibetan language. Likewise, they also learn Dzongkha, the official language of the country.

In the past, they used to follow the ‘slash-and-burn’ method of agriculture that burned the vegetation to plan dry rice for three or four years until the soil was degraded and then moved on to the new places. Since the government issued a policy to ban this farming method in 1969, the Sharchops have settled permanently and raised cattle such as goats and pigs. 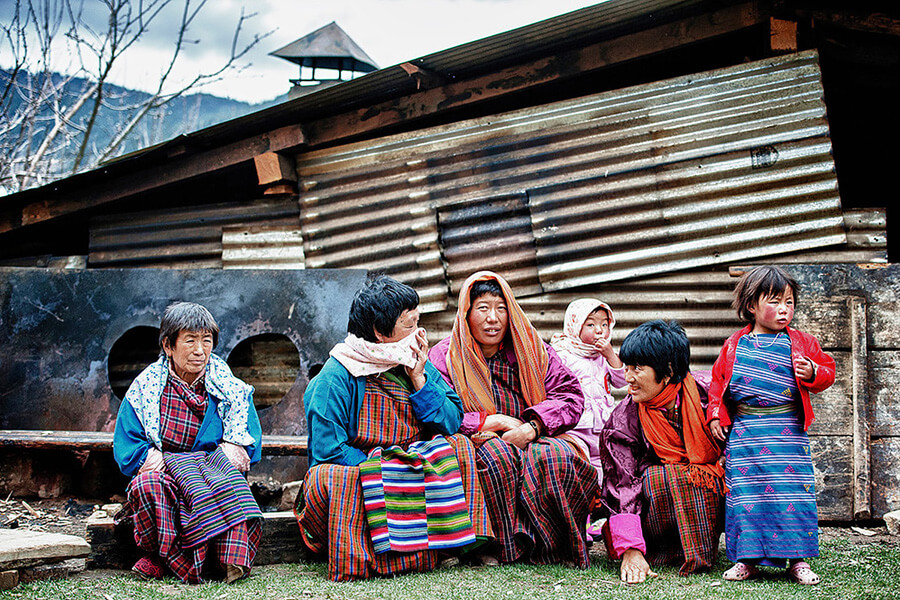 The Sharchop shares the same characteristic with the Ngalop, in that they practice Tibetan Buddhism and mainly work in the agriculture sector. However, it also witnesses a part of Sharchop following Hinduism. The Sharchops populate sparsely along the mountain slopes and build their houses from stone and wood. Like Tibetan, the Sharchops planted colorful prayer flags next to their houses in which they write some sacred inscriptions and auspicious symbols.

These flags are always in horizontal and vertical forms with 5 different colors symbolizing 5 natural elements: red for fire, yellow for earth, blue for space, white for air, and green for water. It is believed that these prayer flags will bring up happiness and prosperity to people. In addition to prayer flags are prayer wheels. However, they are kept in the dzongs only. It is believed that when turning the prayer wheel clockwise, it will release the mantras to purify the bad karma of people.