Having been known as the country full of interesting facts, namely the very last Buddhism Kingdom in the world, the country with a modest population of only 700.000 people, the home of the world-roof Himalayas, and the happiest country in the world, Bhutan is also bestowed with its unique cuisine that every visitor cannot stand giving it a try.

Bordering China, India, and Tibet, the Bhutan cuisine has a lot in common with these neighboring lands; however, it still holds its distinctive feature: it’s less oily than Chinese and Indian dishes, and much spicier than most Tibetan food. Once getting into a Bhutan vacation, you have to prepare yourself to try burning dishes since one of the main ingredients – often considered a kind of vegetable by local people – in every Bhutanese meal is chilies. Be ready to set your mouth on fire with 5 must-try dishes when setting foot on Bhutan’s land!

Jasha maru is a kind of stewed minced chicken only found in Bhutan. It is often cooked with chicken stock, different herbs, and chilies. What makes it a distinctive dish is the red chilies that people use to cook are grown only in the Thimphu region and this kind of chilies is regarded as the featured ingredient of Bhutanese cuisine. Jasha maru is often served with rice. 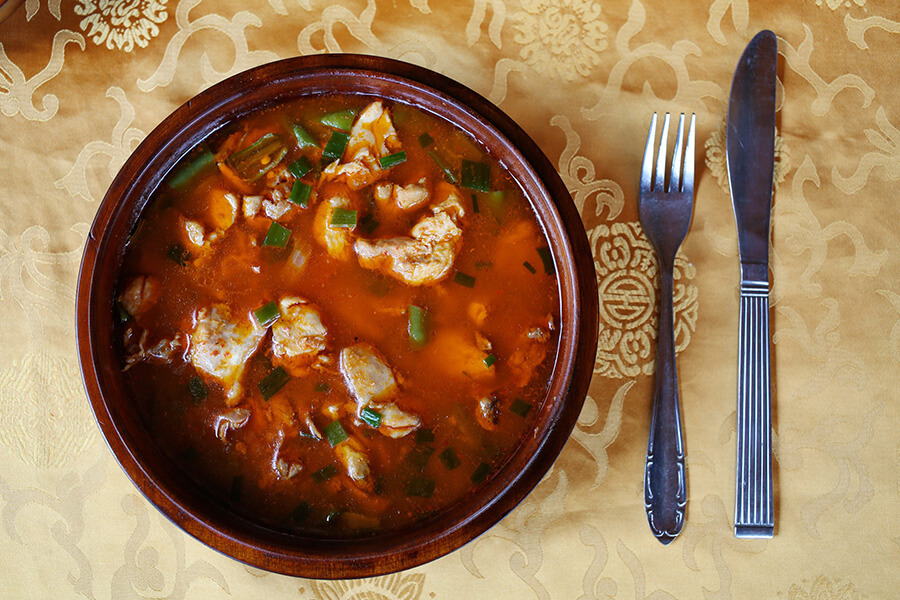 Western travelers may find momo a very distinctive dish that shouldn’t be ignored since that delicacy is immigrated to India and looks similar to dumplings in China. Throughout the Himalayas, from Nepal and Tibet to Bhutan, these steamed rolls are served as local treats. There may have many other variations of momos, however, the differences might be apparent when looking from the inside. People stuff momos with anything, but the typical fillings would be minced pork and beef, cabbage or cheese mixed with ginger, garlic, and other spicy herds. 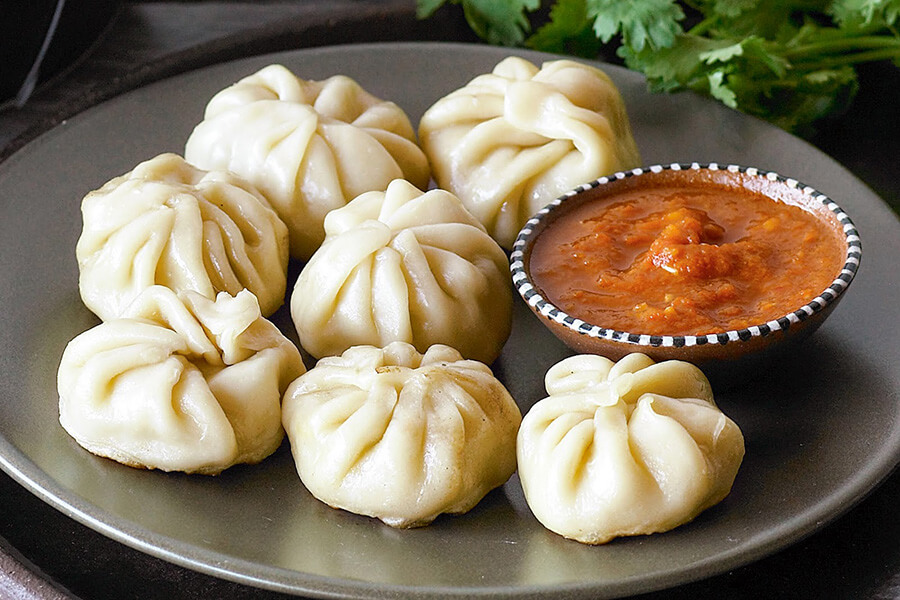 Getting to know more about Bhutan traditions and customs, you may find out that pork is one of the favorite foods of the “Thunder Dragon” citizens and Phaksha Paa (meaning pork with red chilies) is a classic Bhutanese dish that any meat lovers must try. To make this mouth-watering delicacy, boneless strips taken from the pork shoulder are stir-fried with the dry red chilies and then simmered until getting tender. 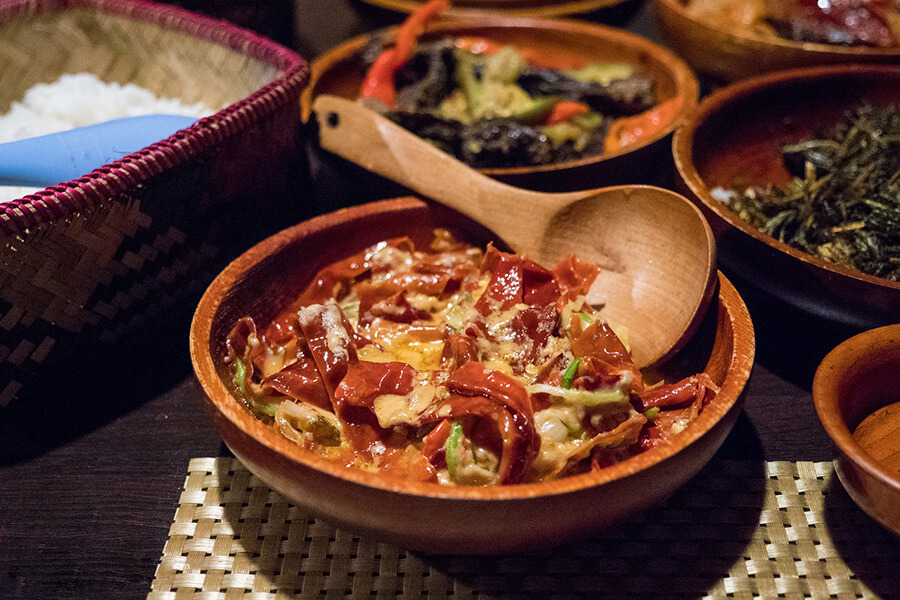 Typically, some kinds of vegetables like radish, bok choy, or garlic are added to balance flavors between proteins and fiber-rich food. Serving Phaksapa Paa with national grains – red rice, and hardly anyone can resist exclaiming “finger-licking good!”.

A magical Bhutanese dish made of beef, radish, and dried chilies, Shakam Paa is truly a food that you should try once there. You may find it a bit chewy because the beef itself is first dried & preserved before being cooked.
This Bhutan dish is an awesome source of protein & is one of the staple diets of all the locals. The way the dwellers dry and preserve beef is a part of the cooking style of the country. 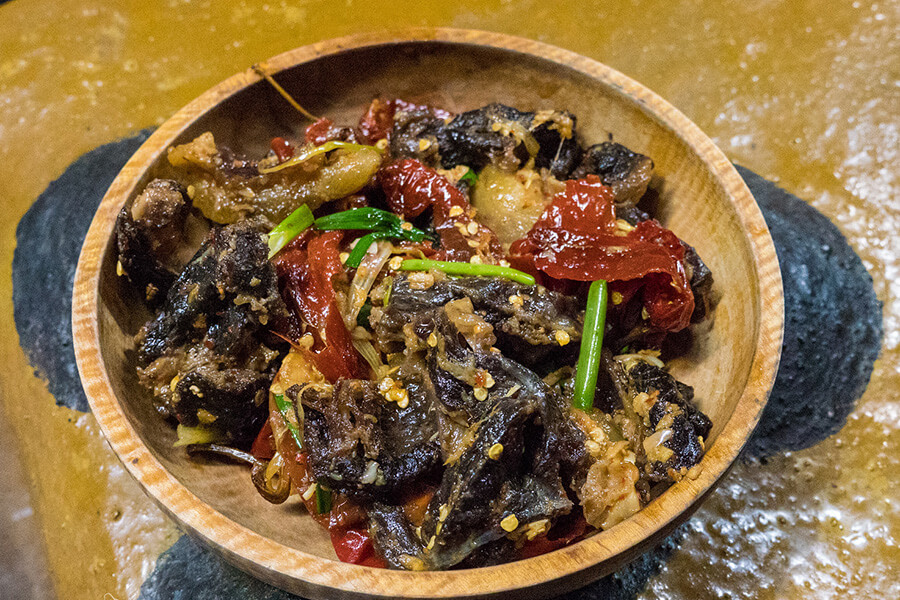 Ema datshi is properly one of the most famous dishes of the “Thunder Dragon” land and is constantly on the top list of must-try dishes of visitors coming to Bhutan. Ema datshi consists of two main ingredients: fresh chilies (Ema) and farmhouse cheese (datshi) and is considered the national dish of indigenous people. 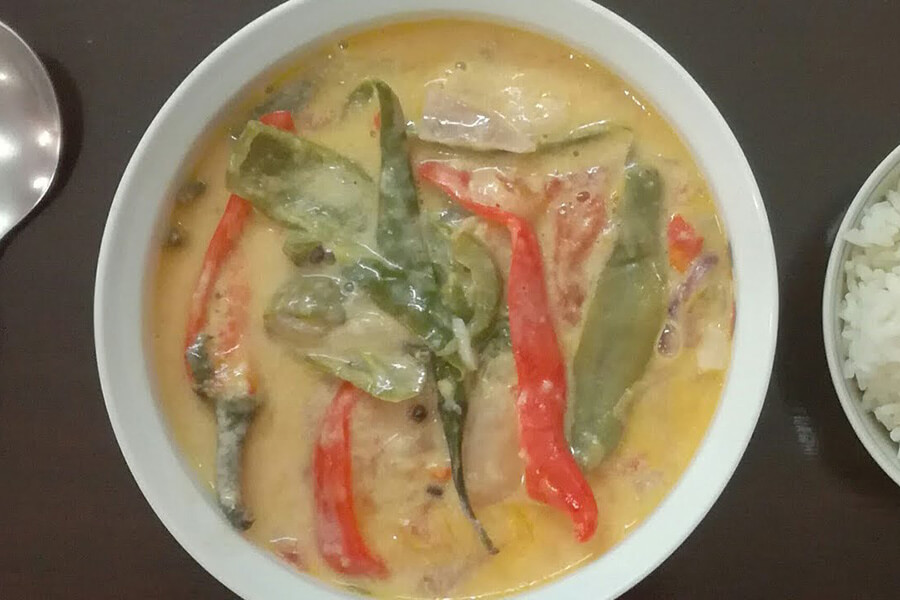 The recipes for this traditionally national dish very slightly to suit each taste: mushrooms, green beans, ferns, and potatoes can be served with, or different kinds of fresh or dried chilies like green or red ones can be substituted. Just like the traditional “pho” of Vietnamese people, Ema datshi is also the national pride of Bhutanese people.

Being an Asian country and greatly influenced by two neighboring countries which are China and India, Bhutan still preserves the culture of rice grains. Unlike any other country, the rice grains in Bhutan have a very special color – a dark red one. Red rice has been kept as the soul of each meal of Bhutanese people and foreigners may find red rice in either daily meals or on festive occasions. Red rice is grown almost in Paro valley where crops are irrigated by mineral-rich water. 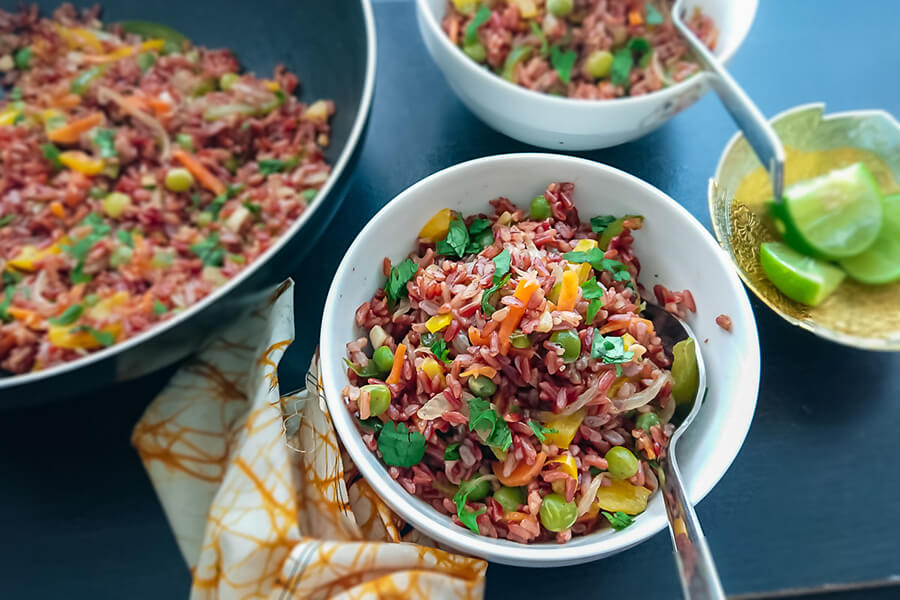 Thanks to the fertile lands there, red rice enjoys a very high nutrient value and brings about a very earthy taste to the diners. With only one serving of Bhutanese red rice, you can get roughly 80% of your daily need for manganese and 20 % for phosphorus. Before being cooked, red rice has a dark red color, but the color turns into a paler one after being cooked, and the texture becomes soft and sticky. This earthy delicacy is often served with meat or other salty food in an Asian style.

In Bhutan, people never waste anything that can be used in another way. This Bhutan dish, Zow Shungo, is a perfect example of what Bhutan food habits look like. The dish is made from leftovers of veggie and red rice and the locals love it so much. 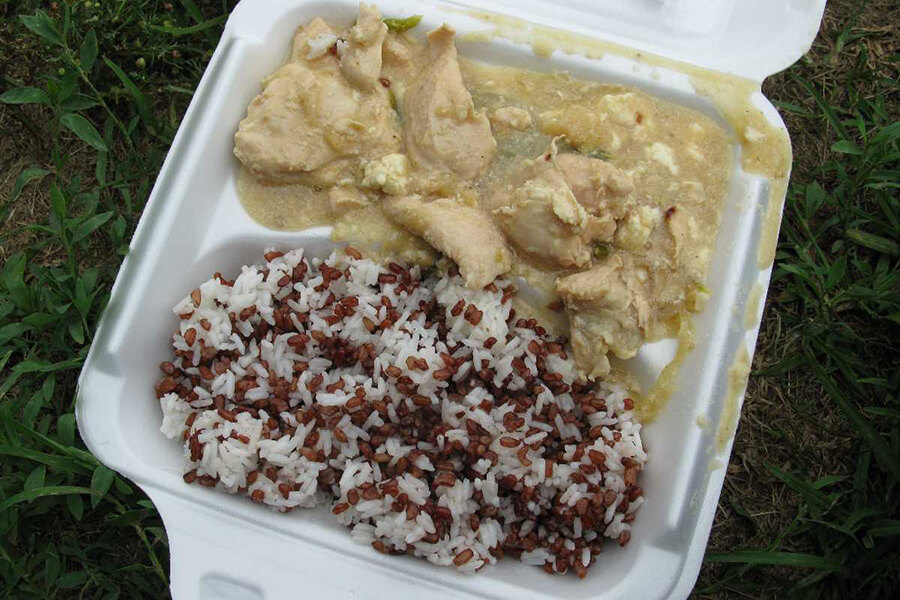 How can I say? This Bhutan dish would be another staple food in Bhutan. It is a noodle dish and it is healthy using bucket wheat. Puta can be a good substitute for rice dishes because it is made by cooking wheat noodles using veggies, sauces, and meat. 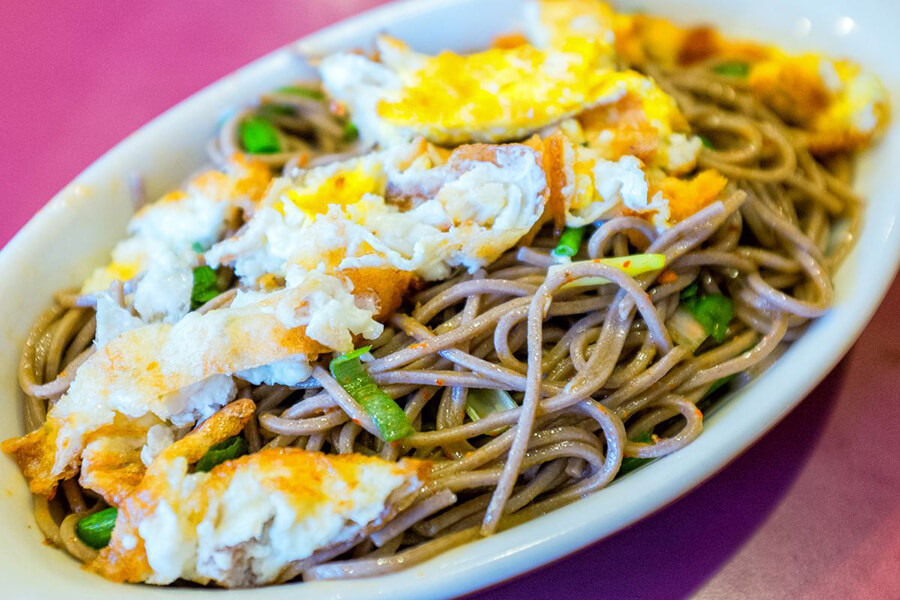 Looking for non-meat dishes? Here you are. Goen Hogey is one of the lightest Bhutan dishes because it is a veggie one. It is made of sliced cucumbers, onions, chili flakes, datshi cheese & cilantro. Eating Goen Hogey, you can feel so fresh. 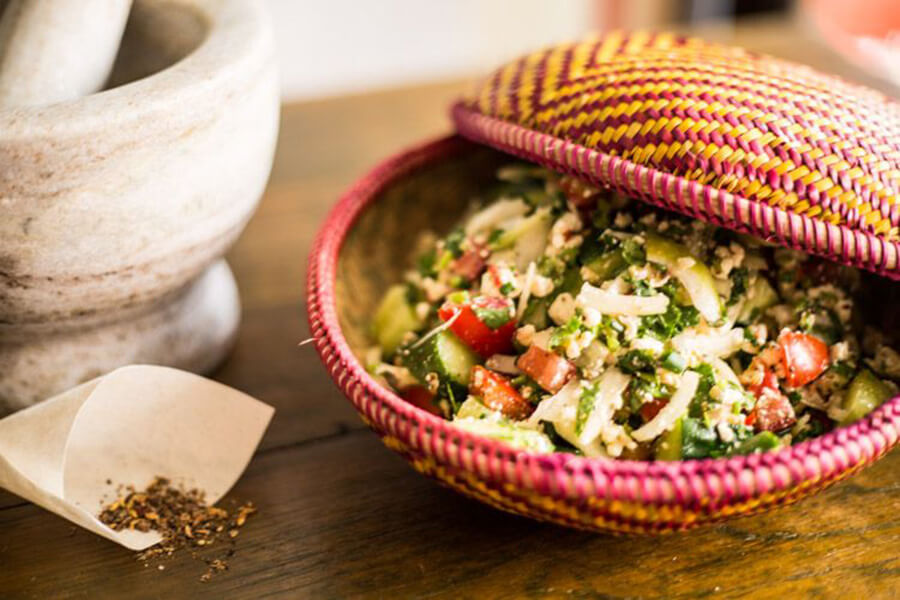