Bhutan festivals reflect the spirituality as well as the vibrant culture of the Thunder Dragon kingdom through the ups and downs of the historical journey. Once visiting this extraordinary country, it is essential to attend the stunning folk festival at least one time in your life to witness the unique Cham dance and approach authentic Bhutan with the friendly community. 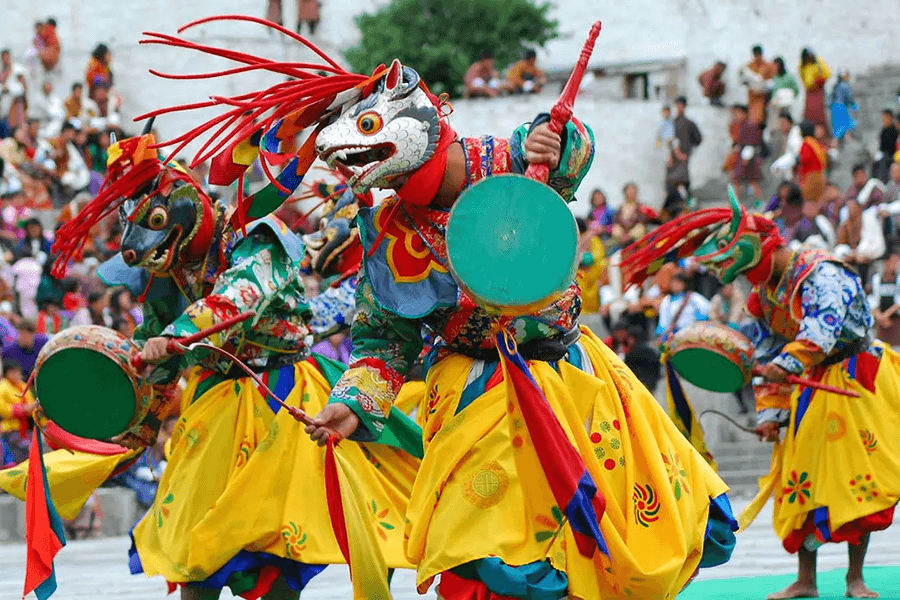 Traditional festivals in Bhutan take place all year round in honor of Saint Guru Rinpoche who introduced Buddhism to the Bhutanese people in the 8th century. Amongst them, there are the 5 most famous religious festivals including Paro Tsechu, Thimphu Tsechu, Jambay Lhakhang Drup, Punakha Drubchen, and Ura Yakchoe. The lively atmosphere and full of colors will ensure a remarkable experience on the Bhutan tour.

Paro Tsechu is one of the most popular and vivid festivals of Bhutan and takes place in Paro, one of Bhutan’s major towns in the west. It is annually celebrated in early April or late March depending on the lunar calendar and lasted for 4 to 5 days in honor of Saint Guru Rinpoche, a Buddhist master of the 8th century.

Attending this amazing celebration, visitors will deeply indulge in the vibrancy as well as have a chance to wear the traditional dress of Bhutan to witness the charm and the fascinating performances of the monks and other people cover their faces with the silk masks to perform the cham (the religious ritual dance). Here you will experience the sounds of trumpets, flute, and other traditional musical instruments of the country. 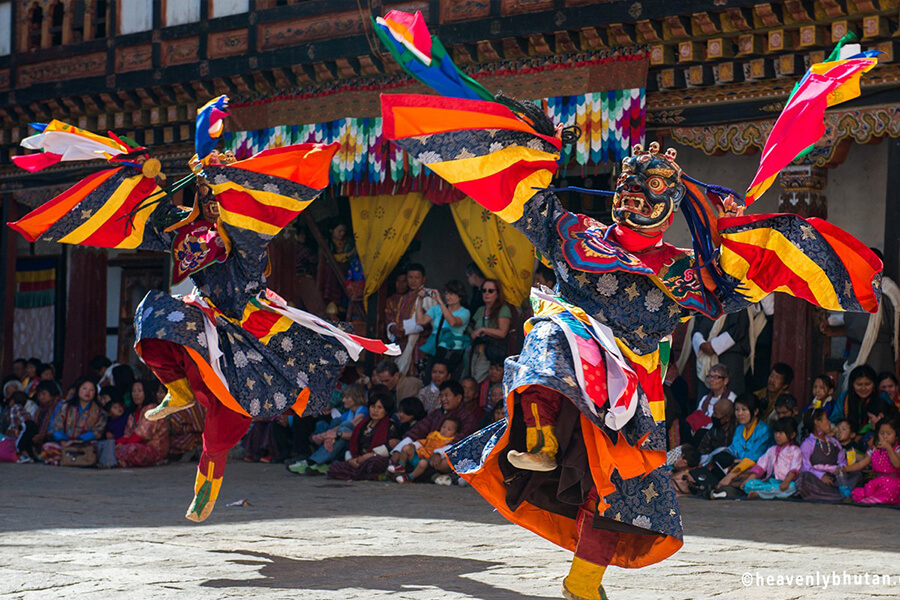 This is also a great chance to meet the King of Bhutan who is the youngest king in the world. Unlike other Kings, he is extremely simple and close to his people. However, you should notice that photographs and even asking the king for taking a photo are not encouraged during this time. On the final day of the festival, visitors will admire a giant religious picture called Thangka depicting the life of the Buddha. The painting is made from silk, and cotton and used as a teaching tool telling the story of mythology as well as the crucial historical events in the past. With a variety of sizes as well as the anger and peaceful images, this would be a great chance for visitors to discover the unique culture of the Himalayan kingdom.

Jambay Lhakhang Drup is held in the Jambay temple of Bumthang district (or Jakar) – one of the 108 temples built by the Tibetan King Songtsen Gampo in the 7th century. This celebration takes place in late October or November (depending on the lunar calendar) and lasts about 4 days to commemorate the temple’s establishment and to honor saint Guru Rinpoche who introduced Buddhism to the kingdom. 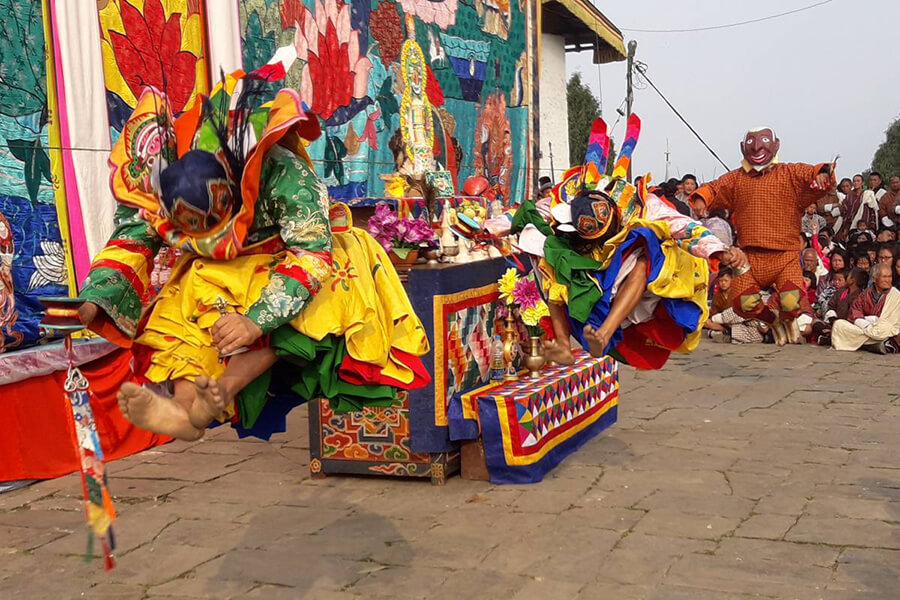 Besides the unique mask dance performed in other festivals, Jambay Lhakhang Drup witnesses the special naked dance also known as the “Ter Cham”. At midnight, a group of men with faces covered by traditional masks and naked bodies go to the courtyard of the temple and perform the sacred dance. According to the legend of the country, the performance is believed to ward off evil. Jambay Lhakhang Drup is thought to be the oldest and most sacred ritual of Bhutan.

Punakha Drubchen and Tsechu, along with other outstanding celebrations around the country, are the majestic festivals of Bhutan. Punakha Drubchen is one of the oldest festivals that take place in Punakha which is home to the former capital of the Thunder Dragon Kingdom, three days of Drubchen are held before three days of Tsechu. It is celebrated to commemorate the victory of the country when Zhabdung Ngawang Namgyal defeated the Tibetan dominants led to the unification of the country. Likewise, Punakha Tsechu is one of the most popular events celebrated annually across the country. These two festivals reflect the spiritual richness of the Bhutanese people and significantly contribute to the cultural diversity of the country. 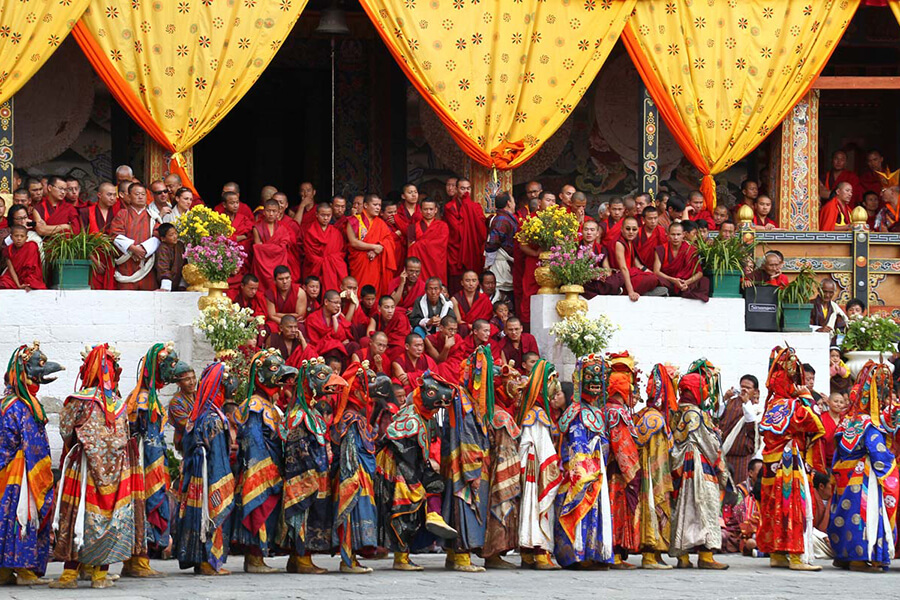 Haa Summer festival – a special event that features a lively and fascinating atmosphere that takes place in early July. Here if other Tsechu traditional festivals are imposed with the formality and solemnity, Haa Summer Festival offers you a chance to immerse in the vibrant and lively experiences. This is an ideal time for tourists to visit the majestic Haa Valley and explore the country’s traditional sports, music, and take part in uplifting activities such as riding, especially kayaking along the stunning Haa river. 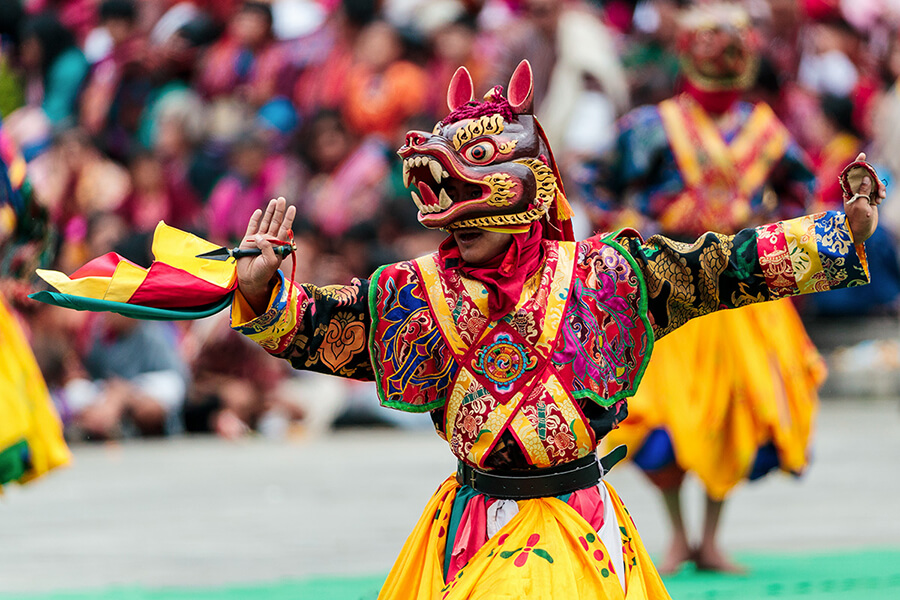 Last but not least, Thimphu Tsechu, like Paro Tsechu, is one of the grandest festivals of Bhutan takes place in the capital city and lasts for three days in honor of the saint Guru Rinpoche (also known as Padmasambhava). If Paro Tsechu is the highlight of the spring festival, Thimphu Tshechu is celebrated in September making it one of the best things to see in Bhutan in the autumn. This occasion is also the best time to visit Bhutan when the weather is pleasant, the sky is bright blue coupled with many people from all districts throughout the country head to the capital to attend the colorful festival after harvesting time. 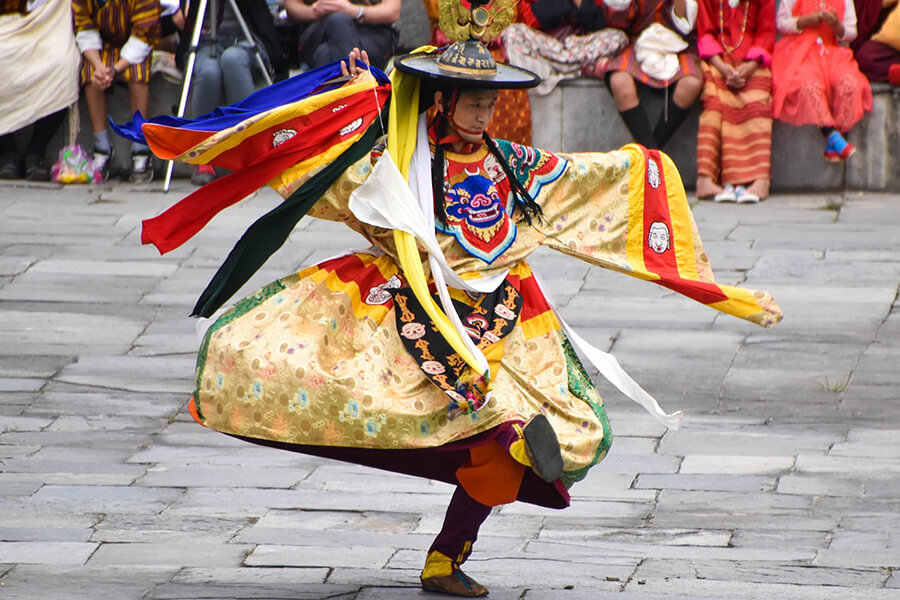 Thimphu Tsechu is believed to remove all bad Karma and bless the good luck for all people who witness the sacred cham performances. Noticeably, these performances send a meaningful message. According to Eastern and Bhutan culture, there is an existence of another life afterlife. Hence, the cham dances convey the life of people after his death until his rebirth.

Top 5 Most Vibrant Festivals in Bhutan

The central region of Bhutan – Wangdue Phodrang, is well-known for its ornamental speeches & songs known as Lozeys. Wangdue Phodrang Tshechu was introduced after the completion of Dzong – the fortress in 1639. This Bhutan festival welcomes dwellers and thousands of tourists to come to revel in the festivities & celebrate life and merriment. 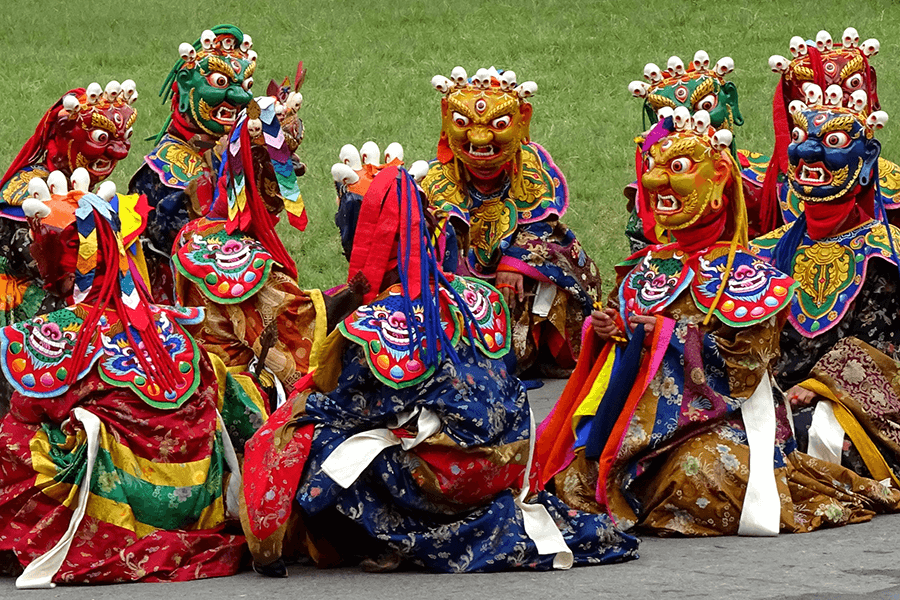 Enjoying the festival, you can see the “Ox Dance” – a major attraction of it. People do the dance to make sure a peaceful afterlife The Wangdue Phodrang Tshechu is concluded with the unfurling of the various paintings’ gigantic scroll – Guru Tshngye Thongdrol.

Matsutake is one of the most well-known harvest festivals in Bhutan. It is a celebration that the locals of Ura Valley do during the period of the mushroom season. The festival marks the celebration of mushroom harvesting in Matsutake. 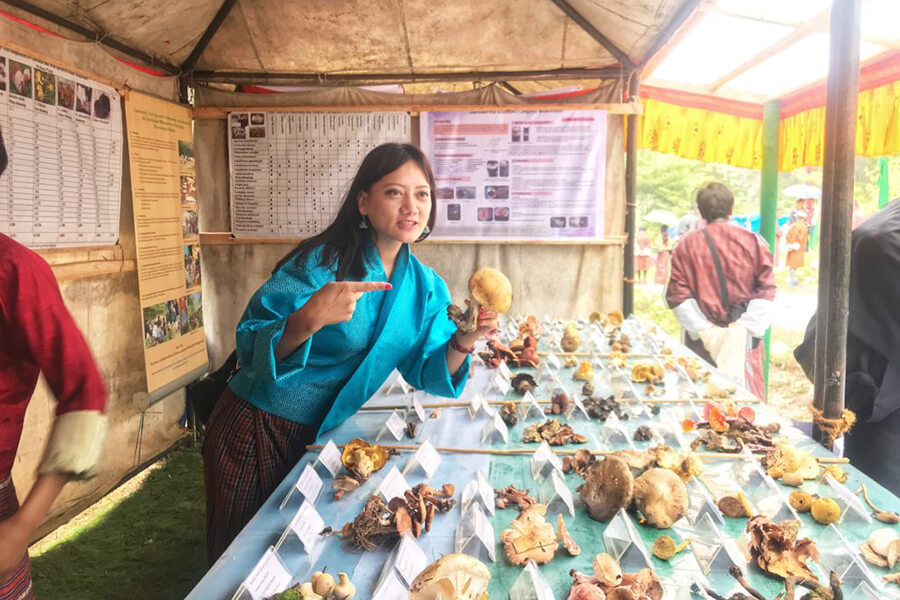 During this time, the dwellers make scrumptious delicacies & visitors can get a peek at the people’s lifestyle there. Activities of the festival include mushroom picking excursions & getting a glimpse of the panoramic forests.

Jomolhari Mountain Festival/ Tshechu happens for approx. 2 days & it is considered to be one of the most exquisite celebrations to be admired. If you are into enjoying famous Bhutan festivals in 2020, this one is a must. 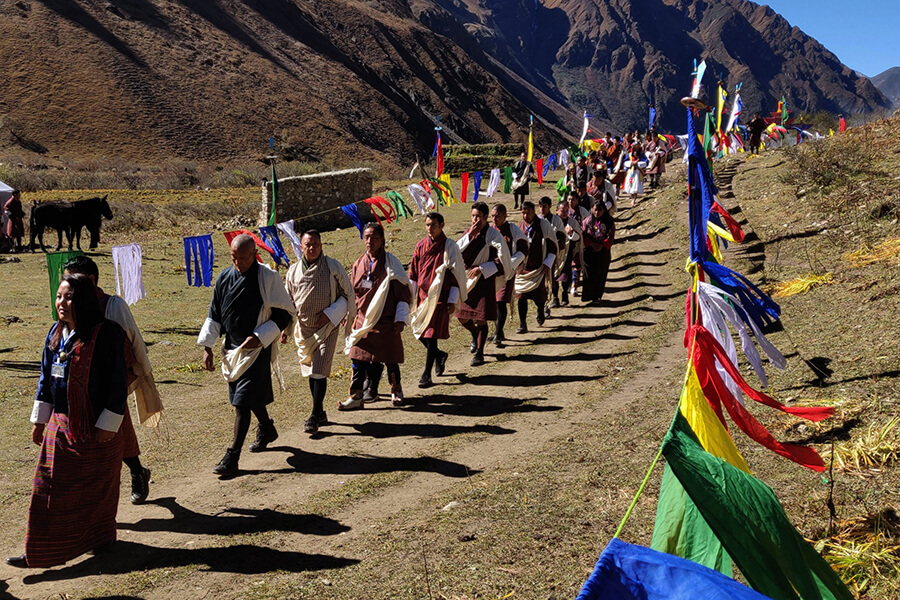 Jomolhari Mountain Festival is held at the foothills of Mt. Jomolhari’s heels. Activities include a snow leopard show aiming in spreading awareness about the declining snow leopards.

Nimalung Festival stands to be one of the most vibrant festivals in Bhutan. The festival is held with much zeal & there would be traditional folk dances as well as other performances which are done by the dwellers. Also, the mask dance would be the highlight of the place. Visitors can see the people beseech the gods to find their blessing & fortunes. 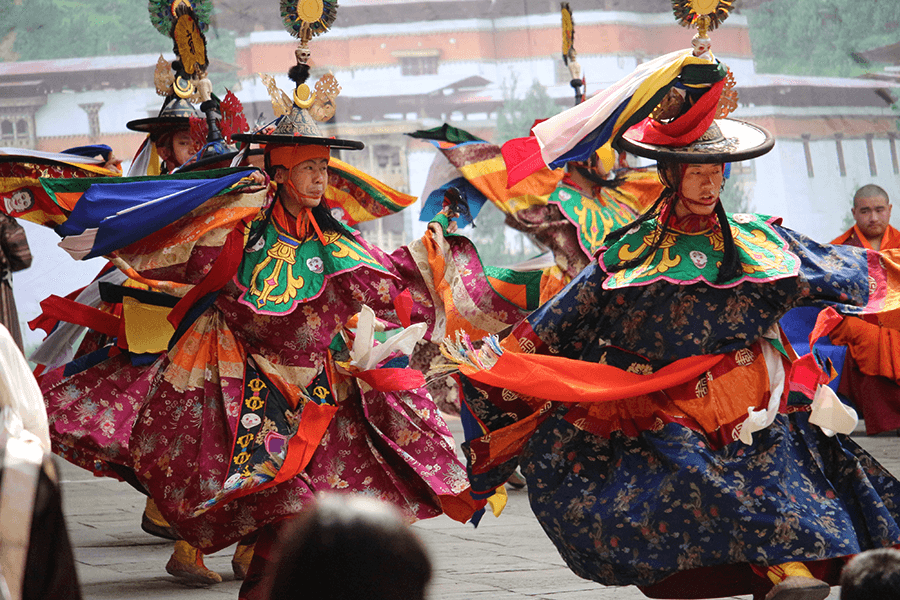 This is a yearly festival in Bhutan that is held in Bumthang (a 10-hour drive from Thimphu). In this event, the nomadic locals from all parts of Bhutan (especially from North East & North West Himalayas) come here to enjoy. During this Bhutan festival, you can witness traditional dances and vibrant outfits that are enhanced by the surreal & lush-green surroundings. 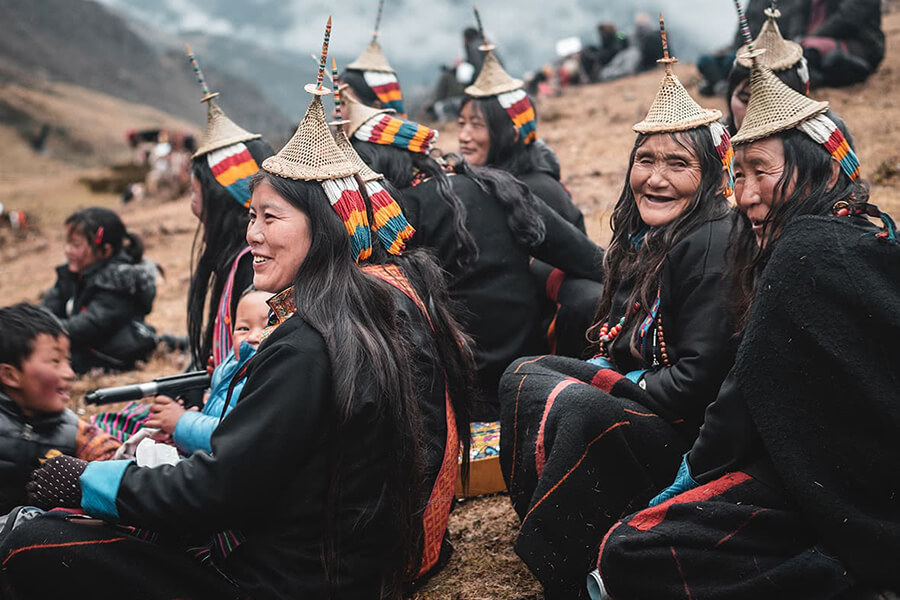 A yearly celebration happening in the Sakteng Valley. The valley is on the Eastern side of Bhutan & the semi-nomads that are named the Brokpas reside here. Although it is an excluded place, this festival is still worth to be experienced that happens for approx. 3 days. 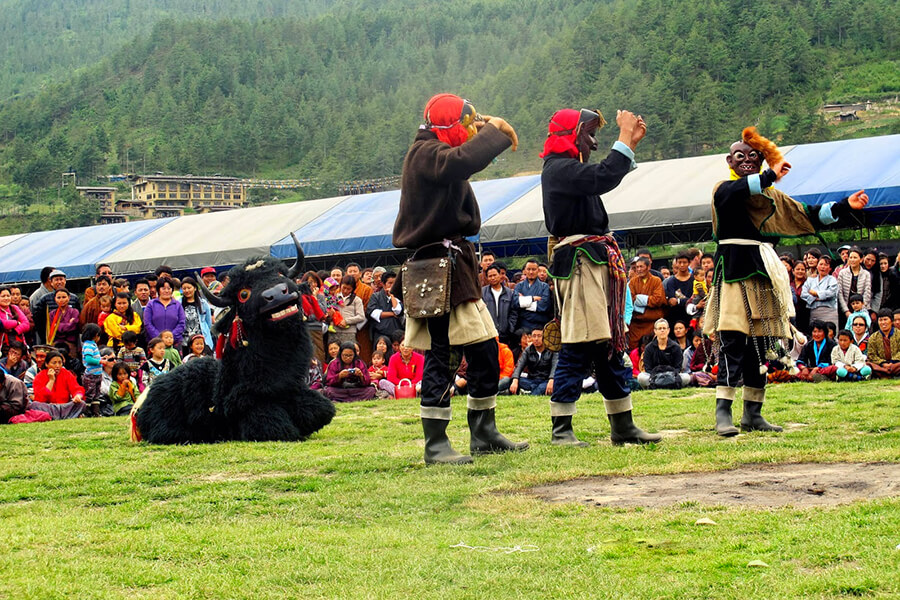 Takin is one of the Bhutan symbols. The Takin Festival is held at Jigme Dorji National Park which is located at Gasa Dzongkha. With this festival, visitors can get an insight into this Bhutan national animal. Other activity you can do is trekking, and enjoying a hot spring baths to make the festival even more special. 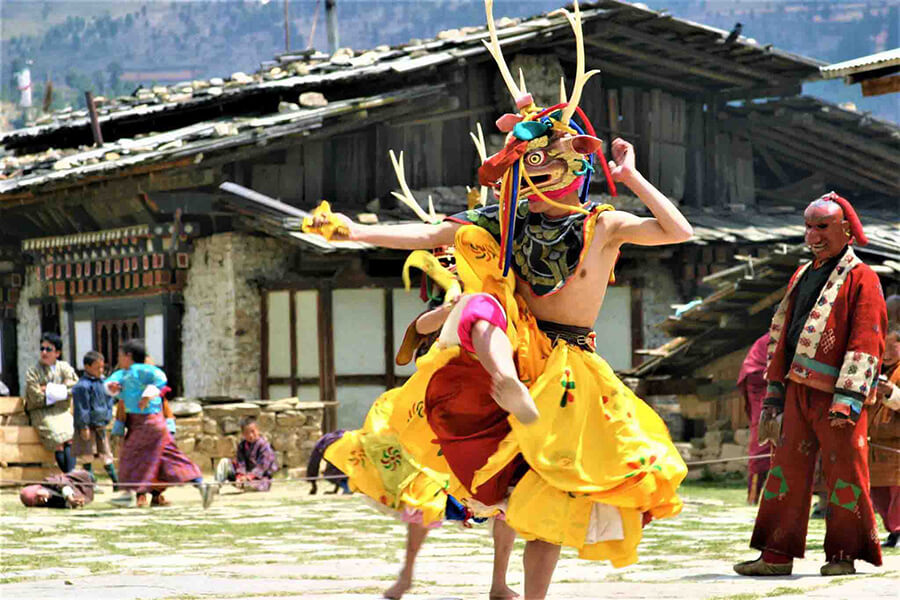 This is truly a fascinating festival that is quite evident by its name; however, it holds quite prevalent among the locals. Taking place at the Gangtey Gompa courtyard situated in the Phobjikha Valley, the Black-necked Crane Festival has a message to mankind that is creating awareness on protecting the endangered black-necked cranes. 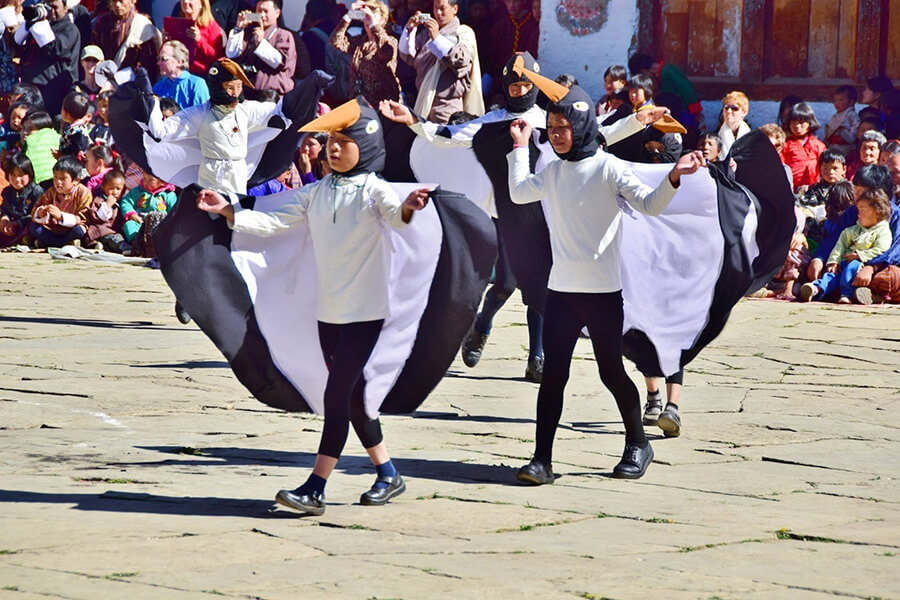 Traditional festivals play a vital role in the spiritual life of Bhutanese people by preserving and developing the country’s unique tradition and culture. Hence, visitors are encouraged to dress modestly in Bhutan’s traditional dress and avoid wearing shorts, shorts skirts, or crop tops whenever you attend the festival. Additionally, important celebrations witness enormous visitors, and thus the accommodation during this time is always at a premium and scarce. For this reason, it is better to book early as soon as you plan Bhutan festival tours in order not to miss an opportunity to indulge in excellent experiences. 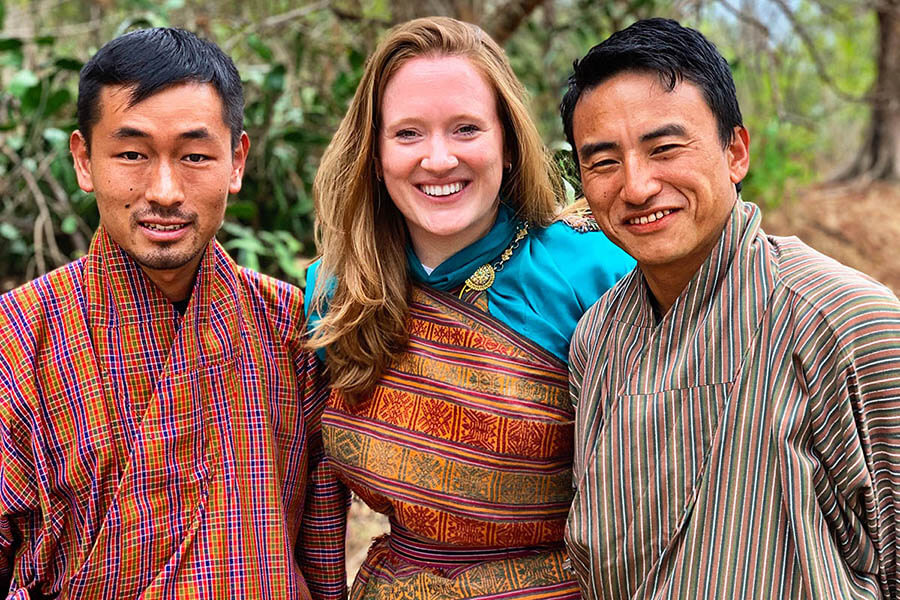