The Takin (Burdorcas Taxicolor) is the national animal of Bhutan due to its association with Bhutanese religious history and mythology. Legend has it that in the 15th century, a Tibetan saint, Drukpa Kunley well-known as “Divide Madam” created this unique animal. This Bhutan national animal is a muscular animal with strongly developed fur. The Takin is considered among Bhutanese people as one of Bhutan’s national symbols due to its own unique and distinct features that resemble a quaint blend between a cow and a goat.

The population of the Takin in the wild is roughly 5069 in total, as reported by Forestry Bureau Shaanxi province in 2001. The Takin live in a group of approximately 20 members and are found above 4000 meters on the north-western, and far northeastern parts of the Kingdom, and their daily food is bamboo.

The Takin is an extremely rare mammal with a thick neck, four short muscular legs as well as a long shaggy coat, adorned with a dark stripe along the back. They secrete a strong-smelling oil substance covering their entire body.

There are four subspecies of the Takin ranging from Golden Takin, Mishmi Takin, and Sichuan Takin to Bhutan Takin, showing differences in coat color that unlike female Takins with light color faces, the male ones have dark faces making it possible to easily distinguish. As mentioned before, the Takin tend to live in a small group; however, the older male is into living alone for the rest of his life.

The Bhutan national animal is one of the endangered species due to over-hunting and habitat fragmentation. The Bhutanese people consider Takin’s meat to be scrumptious; hence, they hunt them. Apart from the locals hunt Takin to keep them as pets. The fact is that Bhutanese people love Takin as their pets and food supplement; thus it is far too easy to understand why the Takin is considered the national animal of Bhutan.

During your Bhutan vacation, you will have a chance to bump into Takin as Mothithang Takin Preserve can be easily visited in Thimphu. So, if you want to visit this adorable Bhutan national animal, feel free to ask your guide.

The Legend of Takin – National Animal in Bhutan

Actually, there would be an exhilarating story behind the creation of the Takin – the national animal of Bhutan that contributed to its high religious significance.

Legend has it that when Lam Drukpa Kunley, also known as The Divine Madman arrived in Bhutan from Tibet (in the 15th century), he delivered religious teachings to the locals whereupon they requested him to conjure up a miracle. And, he concurred, on the condition that he would be fed lunch – a whole cow & a whole goat. 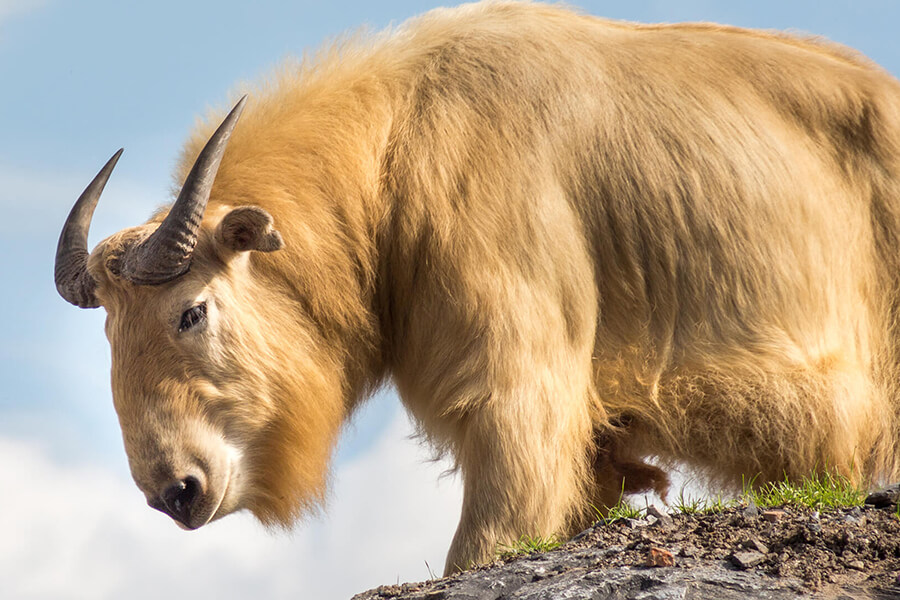 Following what he commanded, the local offered him a massive lunch. The saint from Tibet devoured the flesh of both animals & left out the bones. After that, Lam Drukpa Kunley fixed the head of the goat onto the body of the cow and then, with a snap of his fingers uttered a mantra. That animal instantly sprung to life & began grazing on the meadows. The animal was then named “Dong Gym They” – Takin.

One thought on “Takin – National Animal of Bhutan”