A Bhutan wedding ceremony is a lifetime event of each Bhutanese people may differentiate themselves from others by celebrating their own unique traditional wedding parties. As Bhutan is greatly influenced by the traditions of Buddhism and still preserves the traditional ways of life, this happiest country holds a very distinctive tradition in Bhutan marriage. 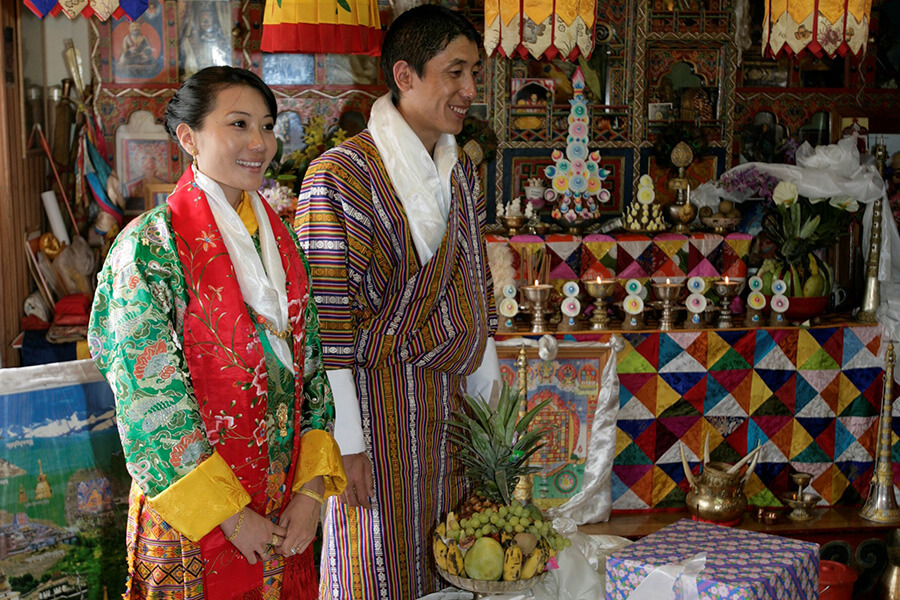 For Bhutanese people, the wedding ceremony is not a simple exchange of vows and rings but a whole set of religious rituals performed by Buddhist monks and lamas, which is believed to tie the bond between husband and wife as well as bless the couple for a lifetime of love and happiness. Keep scrolling down for better insight into the most magical things in the Bhutanese wedding.

Occasionally, the wedding would take place either in Kyichu Monastery or Druk Choeding temple on an auspicious day according to the Bhutanese calendar and is followed by a number of rites made by Buddhist Monks here.

Early on the chosen auspicious day of the wedding, the monks chant the mantras while burning the incense and making offerings to the local deities. This ritual is performed outside the temple and prior to the arrival of the bride and groom. 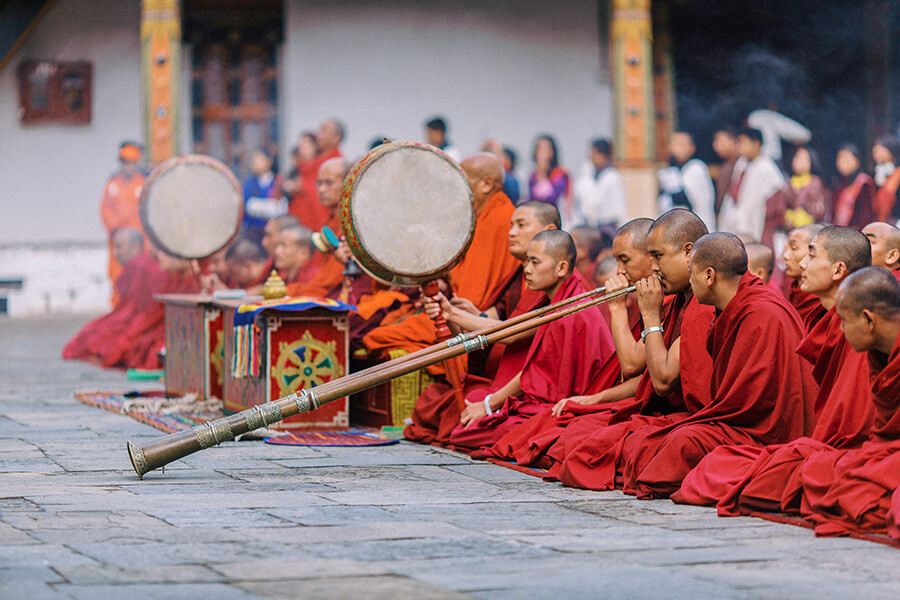 It is a general belief that if local deities are pleased, the ceremony would go smoothly and successfully and the blessings of love and happiness would come true to the ones seeking them. That is the reason why chanting incense and making offerings to the deities as a way to seek deities’ approval are indispensable rituals of each ceremony in Bhutan.

Upon the arrival of the groom and the bride, the butter lamps would be lit up after 6 times prostration of the couples, 3 times at the Head Lama or Rimpoche, and 3 times at the main altar. It is believed that the lighting of a butter lamp not only lights up the house of God but also lights up one’s own life. 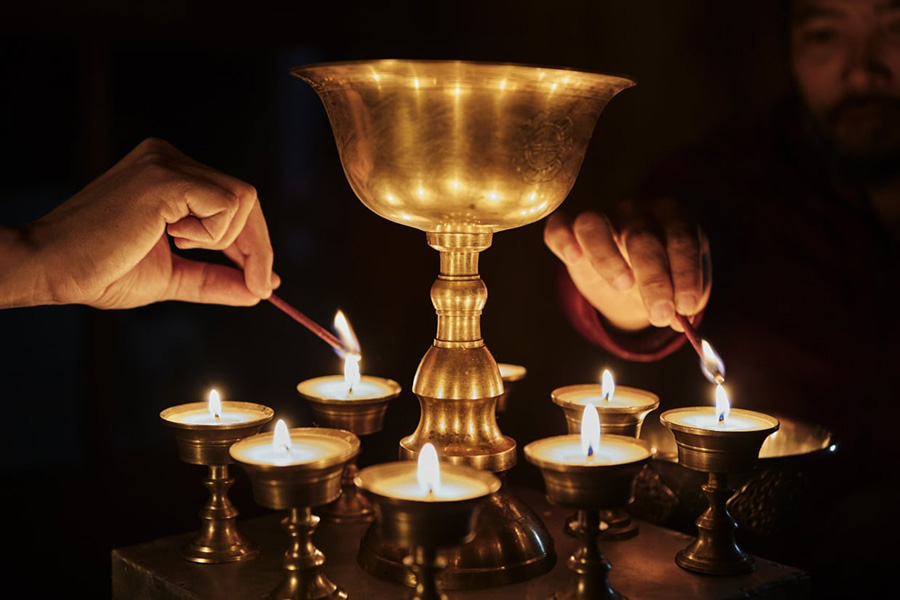 After the arrival of the bride and groom, the monk and the Head lama would perform the Thrisor service. This purification and cleaning ritual is believed to cleanse the people’s body, speech, mind, soul, and more importantly all the sins. 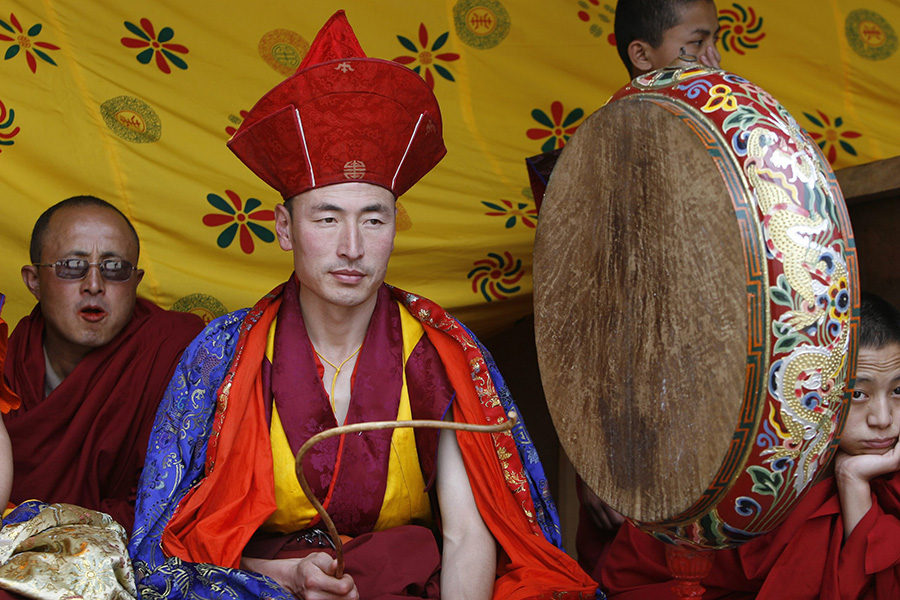 Changphoed ritual is the offering of locally grown brew or Ara to the deities. After the offering, the remaining brew would be served and shared by the groom and bride in the same phoob – a traditional wooden bowl. This ritual signifies the bond that the husband and wife will share for the rest of their lives. The ritual is followed by the exchange of wedding rings. 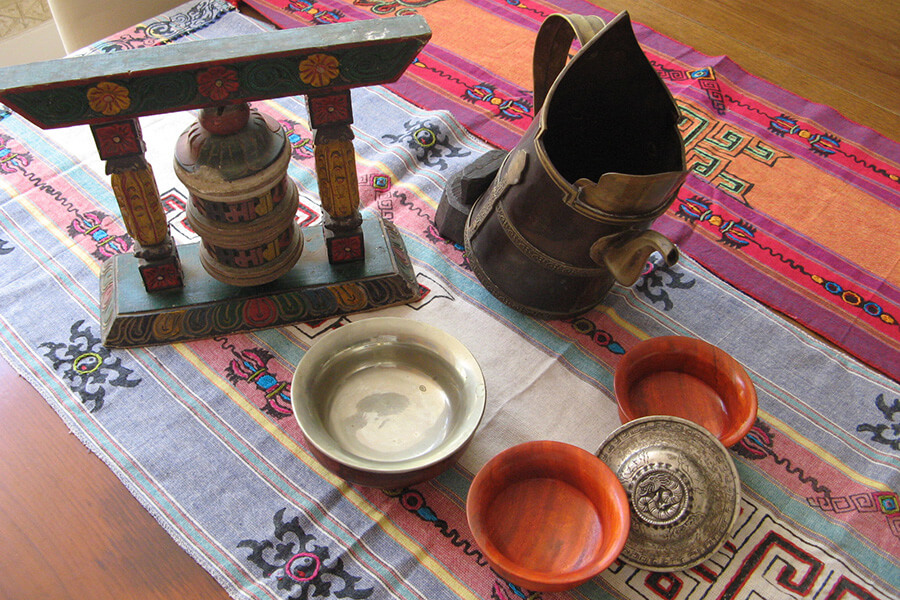 The exchange of wedding rings is done in every Bhutan wedding ceremony in the world and the meaning of the ritual is to bind the groom and bride forever.

Tsepamey is the name of the God of longevity and the ritual goes with the blessings to the Bride and Groom for a lifelong happy marriage. This ritual is performed by the Head Lama. 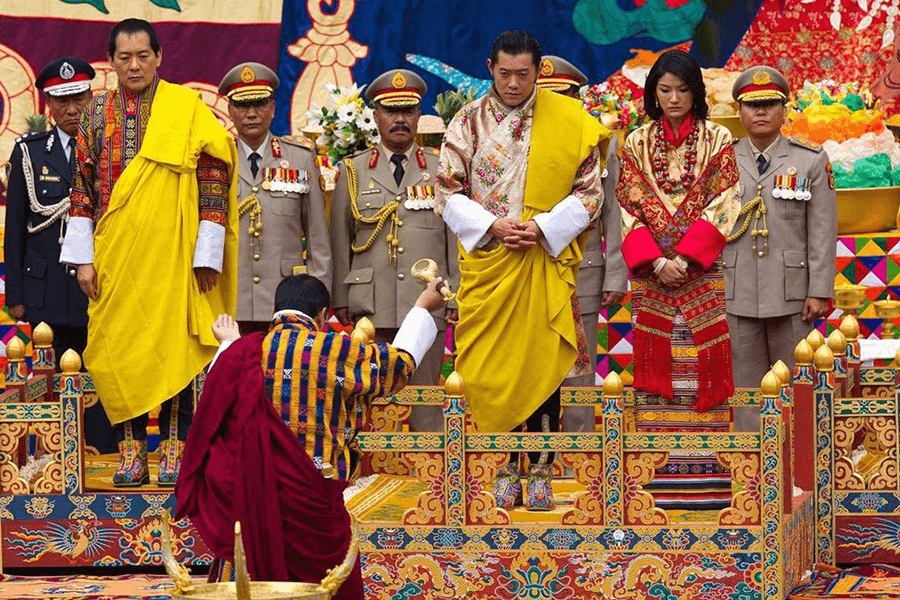 The food-sharing ritual or Zhungdrey takes place during the whole process of the ceremony in a fixed order. First, the fruits and food are served to the local deities, then to God, and eventually to the people gathering at the ceremony.

Typically, served fruits are oranges which are considered to be attractive, and delicious with intact flesh inside, representing the close bond between the couples and ensuring eternal happiness. Note that the fruits served in the ceremony should not be refused nor wasted since it is believed to be improper to behave that way.

Here we come to the last part of the ceremony with the presentation of Dhar Nyanga – symbolic five-color scarves. The ceremony will end with the offering of the scarves to the groom and the bride given along with good wishes for a prosperous, happy, and fulfilling married life.

As Bhutan is a country under the great influence of Buddhism and its traditional lifestyle, the Bhutanese royal wedding is also held in a very Bhutanese way. The main ceremony takes place in the second oldest and largest dzong in Bhutan, Punakha Dzong, meaning Palace of Great Happiness and Bliss. The wedding attire also features the rich Bhutanese tradition.

Not being assimilated by the Western weddings of luxurious modern wedding dresses and suits, royals still preserve Bhutanese customs by wearing traditional costumes. The bride puts on a national dress for Bhutanese women, Kira – a raw silk hand-woven traditional dress while the groom wears traditional yellow silk go – national attire for men. Furthermore, the whole ceremony is organized under the conventional Buddhist rituals and the main organizers are the monks and lamas at the Punakha Dzong.

In contemporary Bhutan, marriages based on family ties have been replaced by marriages based on mutual affection. Since the twentieth century, partners have had the freedom to arrange their marriage by themselves with no restriction from traditional customs.

The minimum age for marriage in modern Bhutan society is sixteen for women and twenty-one for men. Child marriage practice in Bhutan has been restricted and gradually abolished in accordance with the modernization of Bhutan.

Inter-ethnic marriages, previously being forbidden, have been encouraged greatly in modern days; however, intercultural marriages or marriages of foreigners to Bhutanese citizens have been deprecated by bylaws and foreign spouses will not be entitled citizenship or citizen privilege.

So, if you enjoy a Bhutan vacation and fall in love with a lady, just persuade her to go with you to your country and, of course, you must have the agreement from her family. I think 90% is impossible but just try if you really love her and want to make a Bhutanese lady your wife.

The custom of polyandry was eliminated entirely in modern days of Bhutan; and polygamy, though being restricted, was still in existence here and there. The law in the 1990s allows men to have as many as three wives as long as they can be able to get the first wife’s permission. The law also supports the wives in the mission of seeking divorce or alimony if there appears any disapproval of polygamy practice.

The Home of Newlyweds 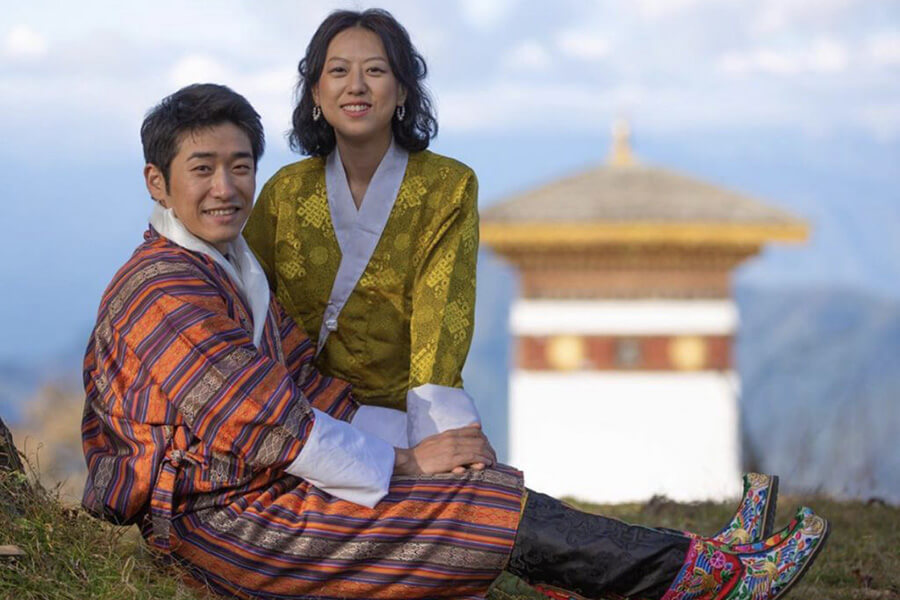 The home of newlyweds was determined by the greatness of the need for supplemental labor that each parental party desired. If the groom’s family had an insufficient labor force for farming, the bride would come to join the groom’s family, and vice versa. If both families had an adequate number of laborers, the spouses might choose to set up their own homes.