Bhutan – the kingdom of “Thunder Dragon” is widely known for the majestic landscapes and vibrant culture. One of the crucial elements making Bhutan a treasure on the eastern slope of the Himalayas is the hand-woven traditional dresses including “Gho” for men and ‘Kira” for women. It was first introduced in the 17th century by the unifier of Bhutan “Ngawang Namgyal” to give a distinctive identity to the people. So far, it has become the national costume symbolizing the cultural aesthetics of the country. 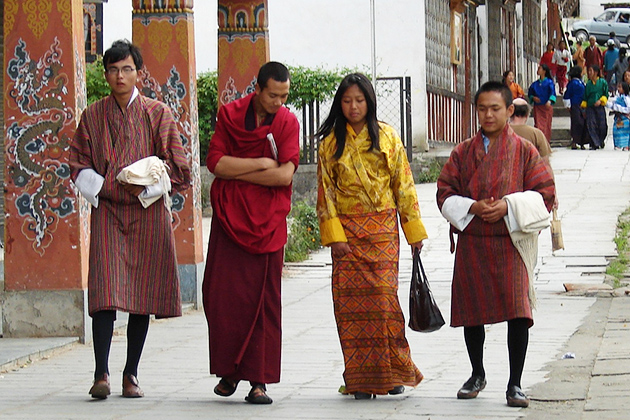 In the attempt to preserve and promote the national cultural identity, it is made compulsory for citizens to wear it at schools, government offices, Bhutan festivals, and important occasions. Since the Government of Bhutan opened their isolated country to the outside world, it is available for tourists who have gone through Bhutan tours to wear Gho and Kira during the vacation. Keep scrolling to have an insight into the various types of accessories making up the beautiful national dresses to fulfill your deep understanding of the unique Bhutan culture as well as the custom of the country.

Gho is the traditional and national attire for men in Bhutan. Before getting to know more about it, we should notice that there are intricate types of accessories forming the perfect traditional layout. For instance, Gho is a large knee-length robe made from various types of patterns. Normally, it has plaid and striped designs with different colors such as orange, yellow, and so on. 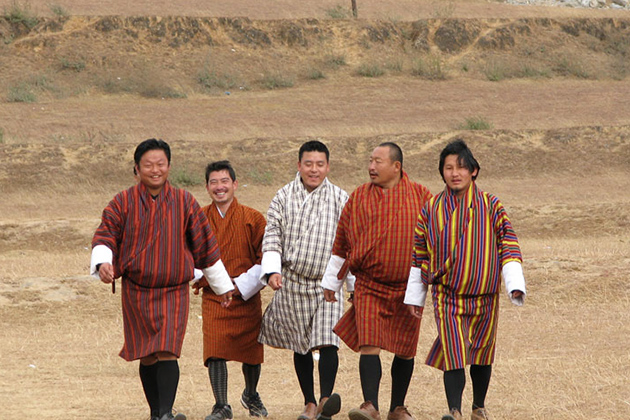 It is nicely wrapped around the body and well tied by a Kera – a woven fabric belt designed with a myriad of colors and patterns at the waist to form a big pocket in front of the abdomen to keep things like wallet and mobile phone inside. Before putting on the Gho, men always wear a long-sleeve and short white jacket called Toego (or Tego) under it.

Another part of the Gho is Kabney which is worn on formal occasions or when visiting the Dzong. It is a large silk scarf draped over the coat from the left shoulder to the right hip. The colors of Kabney is varied from person to person in different positions in society. For instance, saffron Kabney for the Druk Gyalpo (Bhutan King), and the chief abbot, orange for ministers and other cabinet members, blue for the legislature, green Kabney for the judiciary, and white for common men. 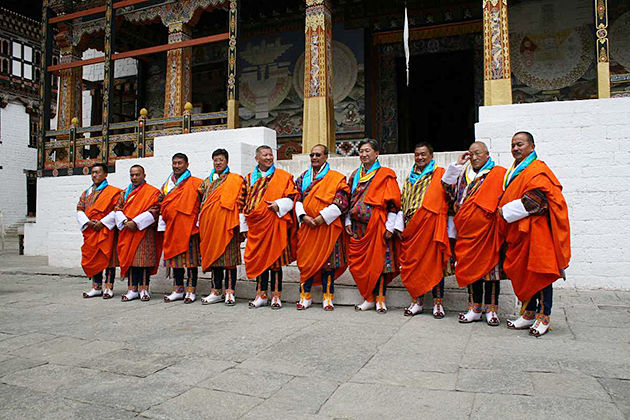 Last but not least, the traditional shoes for men in Bhutan, called Tsho Lham contain enormous significance. It is said that, when a man wears Tsho Lham, he can visit any Lhakhang throughout the country. 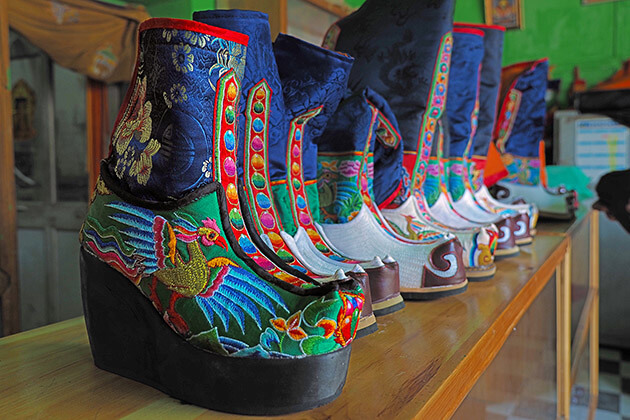 Kira is the traditional costume for women in Bhutan. It is a long-ankle length dress consisting of a rectangular piece of woven fabric which is wrapped around the body. After draping over the shoulder, it is pinned in both sides with a pair of Komas. Koma is an identical clip made from silver or silver gilt with a small piece of turquoise set in the center. 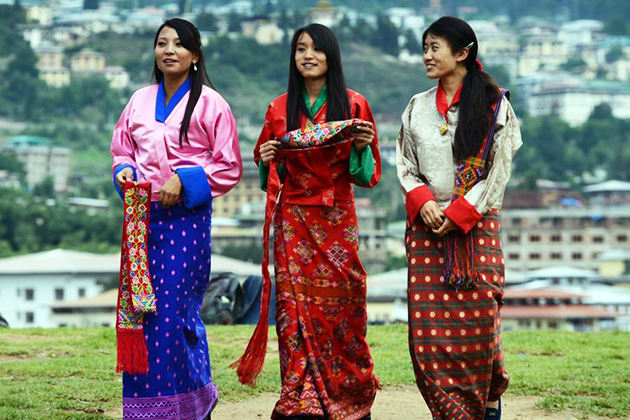 Like men, women in Bhutan also tie their Kira by a fabric belt at the waist called Kera. The Keras for women and men are quite different in styles and colors. Generally, the Kera for women is more complicated in comparison with the Kera for men. 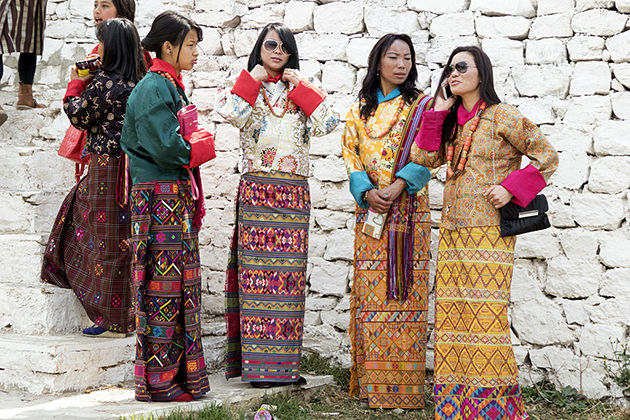 Apart from the layout is a Toego which is worn underneath the Kira. It is designed to more particular to help women enhance their appearance. One more long-sleeve jacket is worn over the Kira is a Wonju. It made from a wide range of materials such as silk, cotton, or polyester. Like Toego, it is designed with various colors. 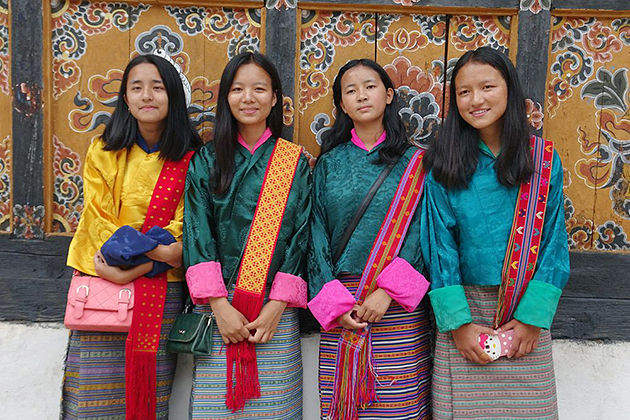 The rest of the layout consists of the Rachu. It is similar to the Kabney of men in which some of Rachus are in different colors representing women’s position. Normally, most Bhutanese women wear red Rachu with intricate design, it is always draped on the left shoulder on special occasions. Traditional costumes symbolize the essence of fascinating Bhutan through the ups and downs of the historic journey. 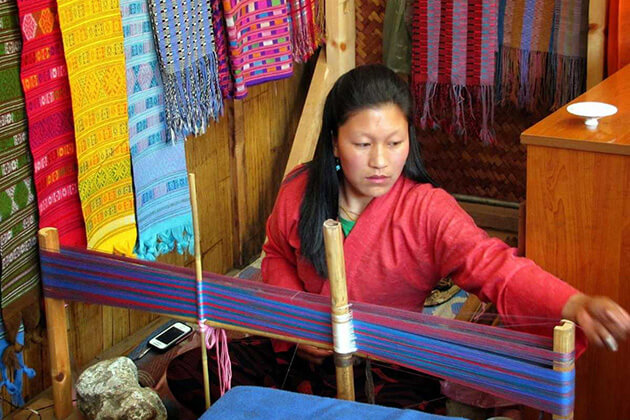 Once in Bhutan holiday, it is worth for everyone to wear the Gho or Kira to interact with the local people to get a remarkable experience in this beautiful country.