If you ask me what is the thing that vividly defines the culture and tradition of a nation most, my answer absolutely is its dances. We cry when we are sad, we sleep when we are tired, and we dance when we are happy. When we dance, it is more than physical activity, it contains our emotion in every move that we send in it. And more than that, dance is the testament to the richness of a country’s traditional culture. 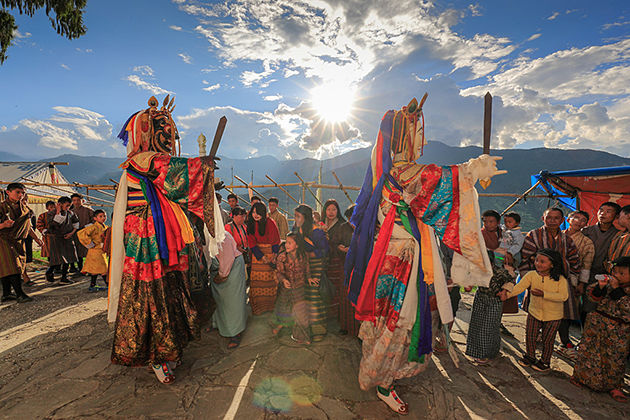 Like most nations in the world, Cham dance, a traditional dance in Bhutan including a series of masked dances, has its own unique way of performing its tradition and culture of the Buddhist kingdom while entertaining audiences. So, to have a completely perfect Bhutan vacation, do not miss the vibrant and meaningful tradition and culture which are showed through the Bhutanese traditional dances. Do not waste your time anymore, let take a look into the folk dances of this landlocked country.

It was back in the 8th century when the Cham dance was first originated by Padmasambhava who introduced Tantric Buddhism to Bhutan. Since then, this kind of dance has been developed and are usually performed during Tshechu, the annual festivals of Bhutan as a token of respecting for the Buddhism and the saints. 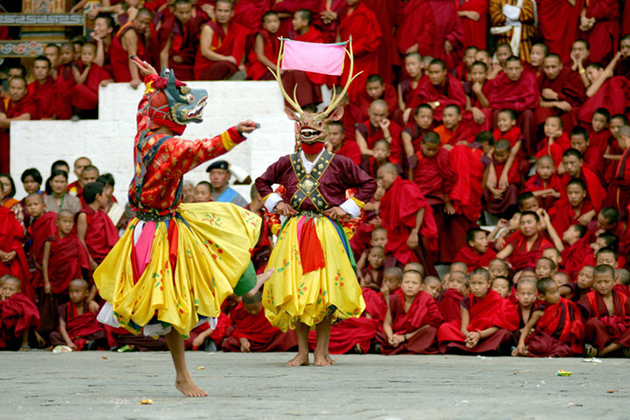 Types of Traditional Dance of Bhutan

In Bhutan, the name of this Bhutanese traditional dance literally means “welcome”. Since it is a welcome dance, it is usually performed at the beginning of any event or special occasion. While performing the Joenpa Legso, men and women wear the traditional dress as male dancers wear “gho” and “tsholham” and female dancers wear “Kira”, “tego” and “wonju”. The way the dancers perform will absolutely catch people’s eyes and get appreciation from all audiences. 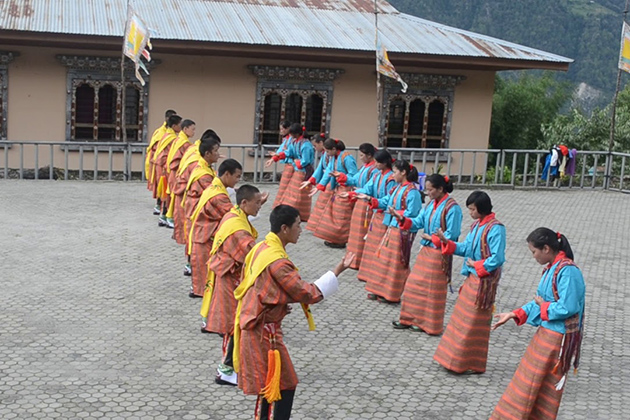 Drametse Nga Cham means “mask dance of the drums from Drametse”, named right after the place where it was first originated in Drametse, a small village in eastern Bhutan. The dancers wearing masks perform the Drametse Nga Cham with drums.

Drametse Festival is held 2 times a years and this dance is the best part of the event. The dance is performed by a group of 16 male dancers and 10 musicians. During displaying the dance, the dancers put on different colored silk robes and wooden animal shaped masks while the musicians play “dung” means trumpets, “rim” means “cymbals”, and “nga” means “drum”. “Nga”, in fact, is played in three different ways in which “bang nga” is a large cylindrical drum, “lag nga” is a cylindrical hand drum, and “nga chen” is a drum that played with drumsticks. Enjoying the vibrantly performing live of Drametse Nga Cham is truly an exciting experience.

Another way to call The Pa Cham dance is The dance of Powas (means heroes) and Pams (means heroines). The traditional dance is performed by dancers wearing colorful silk robes and crowns on their heads. The Pa Cham is displayed by the dancers carrying small cylindrical hand drum while dancing as a ritual of honoring Guru Rinpoche in Tshechus. 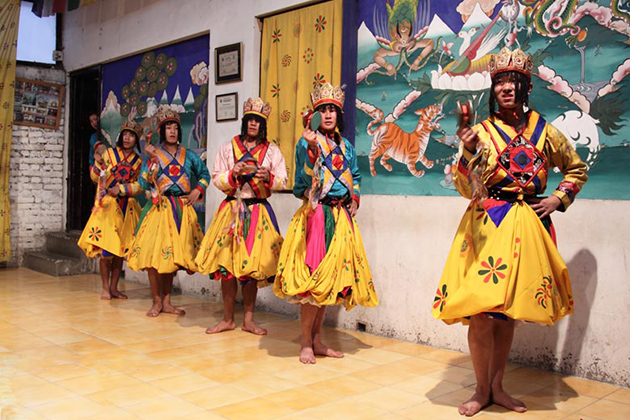 The dance is considered one of the oldest dances in Bhutan as it was originated in the early Buddhist saints, and today performed in the courtrooms as well as dzongs and monasteries. The Zhungdra is displayed by women wearing traditional attires and rachu, a hand-woven craft. It is believed that the dance itself is an offering to the gods. 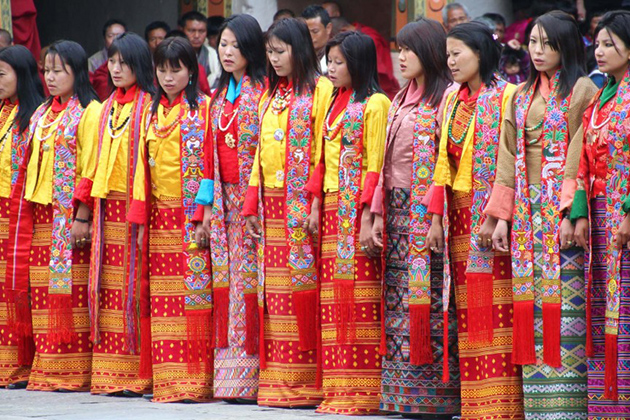 Boedra is another traditional dance in Bhutan that is performed in courtrooms by a group of men and women standing in the circle; however, in some cases, men and women will display the dance separately. Each move of the Boedra does not follow any order, instead, it is in accordance with the rhythm of the song; hence, audiences will never know which step they are going to see next. It is awesome. In fact, the Boedra was initially just a song performance and the dance steps were introduced much later. 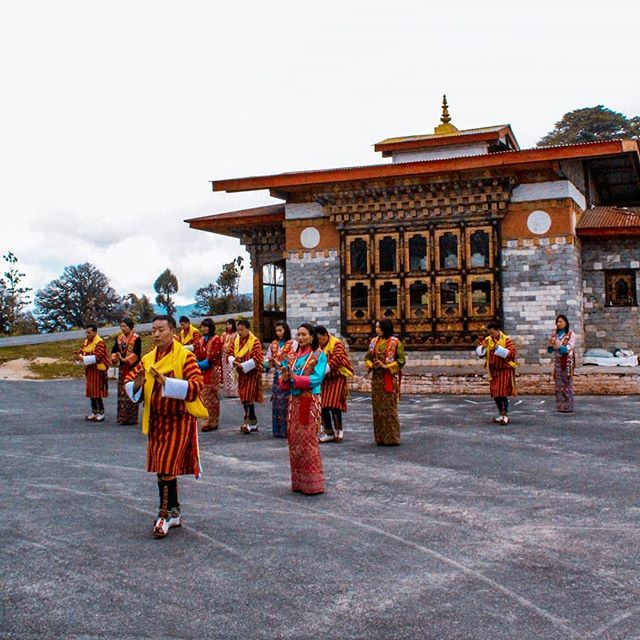 The Bhutan nomadic herders who live in the western high altitude perform this dance. They don’t keep a permanent place; hence, Yak rearing is one of their main source of earning & living. 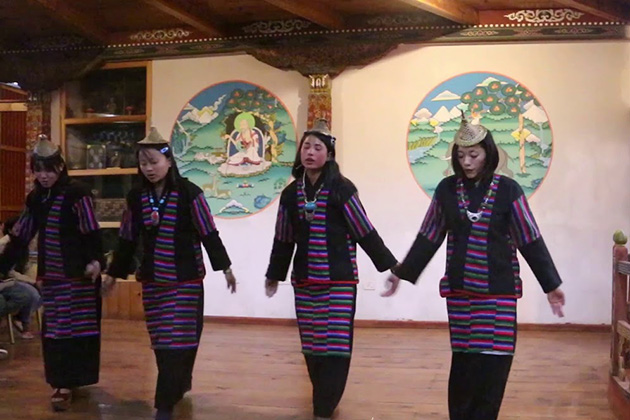 Another special dance of nomadic people. The nomads living in the east of Bhutan perform the Yak Chham Dance honoring the local deity – Aum Jomo (Goddess). 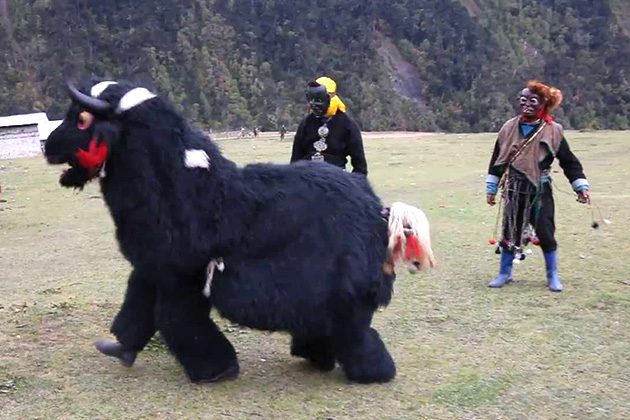 Ashang Gaway Dance will be performed in special occasions. The dance itself is the oldest traditional dance in Bhutan.

When Tashi Tashi is performed, it is supposed to be the end of the performance and everyone will be invited to be apart of it. 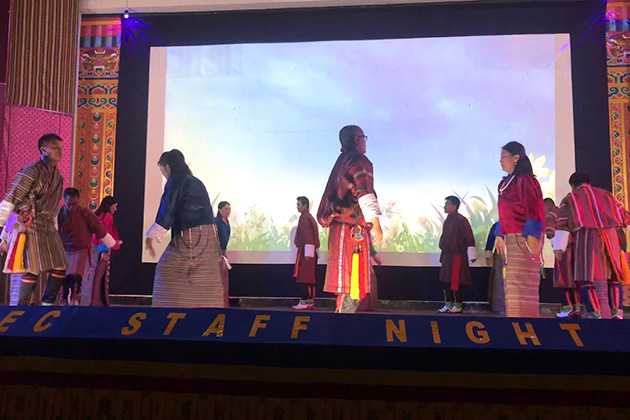 Along with the development of the society, Bhutan traditional dance has become an integral part of the daily life of the Bhutanese people making it among the main tourist attractions of Bhutan. Although they have changed significantly over the past countries, they are still co-existent with the locals. Throughout the centuries, it has been kept by generation to generation expressing authentic Bhutanese cultural identity. 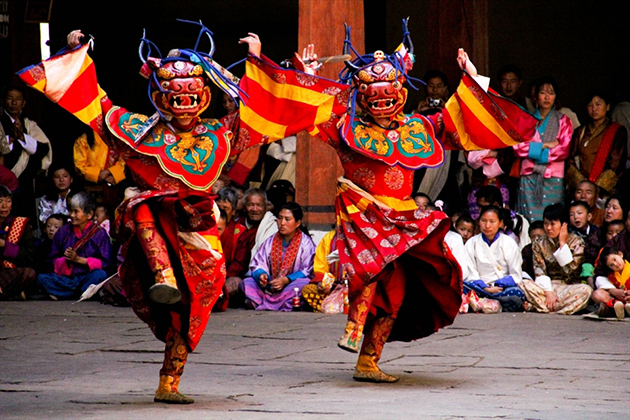 The intricated dances not only show the skill of people but also reflect the beauty of Buddhism into people spirit. Step aside from the adult, Bhutanese teenager is taught to perform the traditional folk dance. In the journey of exploring Bhutan culture and tradition, especially when you get into Bhutan festival tours, there is not more eye-opening than a chance to witness the fantastic performance of Bhutanese dancers to see authentic Bhutan. Be prepared, your heart is going to racing!