One of the oldest and most sacred attractions in Bumthang Valley, Jambay Lhakhang is a one-story complex situated along the Chamkhar Chhu on a plateau offering a perfect vibe that comes from both sacred atmosphere and stunningly natural view.
Jambay Lhakhang, one of the 108 temples known as Thadhul-Yangdhul, was structured by King Songtsen Goenpo in 659 AD within one day to pin down an Ogress being residing in the Himalayas and causing harm to the locals. Another purpose was to spread Buddhism over the Himalayas. 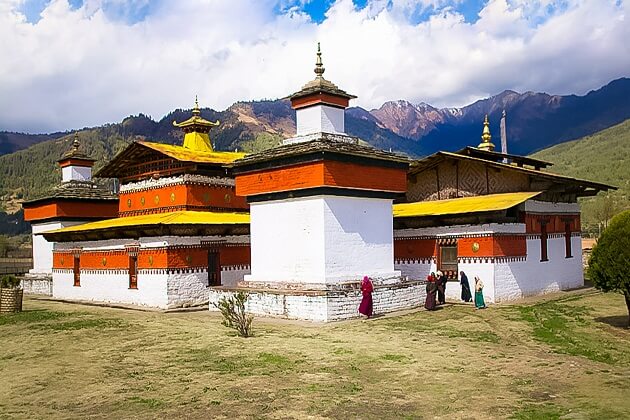 Later, the King of the Iron Castle of Bumthang – Chakhar Gyab, reconditioned the temple in the 8th century AD.
Time went by, King Gongsa Ugyen Wangchuck – the first king of Bhutan built the Dus Kyi Khorlo (Wheel of Time) inside the temple to commemorate his victory against his nemesis: Alu Dorji of Thimphu and Phuntsho Dorji of Punakha after the battle of Changlimithang in 1885. Later, the Chorten Lhakhang was built by the younger sister of the second King of Bhutan.

The major relics the Future Buddha as well as Jowo Jampa (Maitreya) were named following the present name of the temple. Furthermore, the Lhakhang, today, is home to over a hundred statues of the gods of Kalachakra which were structured by the first King of Bhutan, in 1887.

The Bhutan festival annually held on ‘tenth day’ in various temples or monasteries, Dzongs across the country in Bhutan following the month of the lunar calendar corresponding to the birth anniversary of saint Guru Rinpoche and other religious leaders. The Jambay Lhakhang Festival will take place on 13th November this year – 2019 and end of 16th November.

The Bhutanese, according to the traditional story, must attend every festival in Bhutan and, the Jambay Lhakhang Festival is not an exception. During the festival, the Bhutanese come to witness the festival along with enjoying a picnic lunch in their traditional bamboo baskets nicely wrapped inside with a piece of cloth and they stay all day at the festival ground till the festival ends.
Overall, if you are planning to enjoy a Bhutan vacation, do not miss getting into the festival as you will experience something special.

Dance plays an important role in festivals in Bhutan and in Jambay Lhakhang Festival there are two colorful dances which are the Mewang (Fire Ritual) and the Ter Chham (Naked Dance) held late at night in the courtyard.

This sacred dance is displayed late at night and nothing allows you to take photos of it. Time for the ritual and dance is based on the timing of the Astrologers. During the ritual, 16 dancers of the Ter Chham who are picked by the Lama and the elders, will perform the dance without wearing clothes but, there still is a small piece of cloth over their faces to disguise their identities. The dancers will dance around the fire camp for an hour. 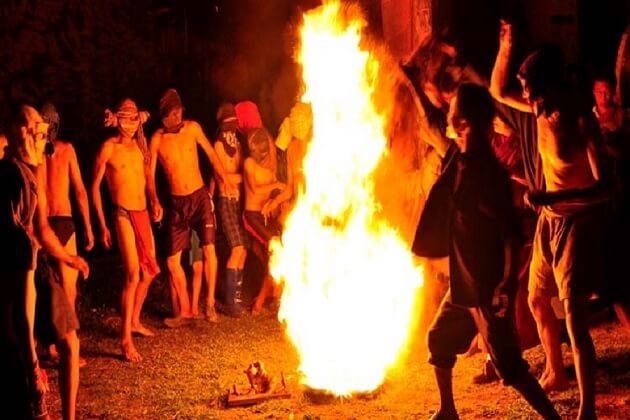 It is said that the Ter Chham was brought in by the treasure discoverer – Tertoen Dorji Lingpa, on the prophecy of the saint Guru Rinpoche in the 8th century. The dance was launched to distract the evil spirits.

This dance is celebrated in the evening to bless the infertile women making them be able to bear the children.
The purification rituals are performed by monks and the Mask dancers light the fire. The people and visitors attending the festival will run and jump under the flames 3 times to get themselves purified and blessed from sins and evil deeds. 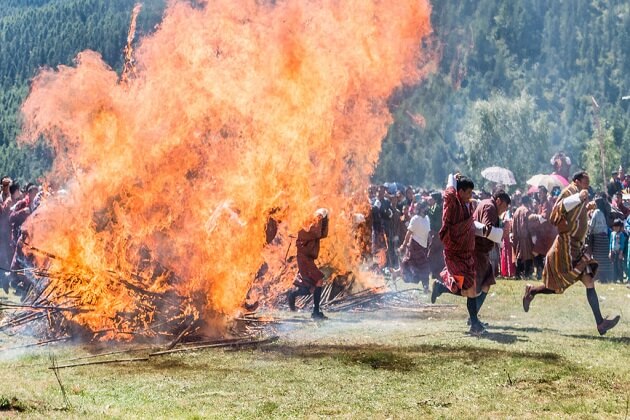